Mark 6:1
And he¹ went out from thence²,
and came into his own country³;
and his disciples⁴ follow him¹.‭

¹) Jesus.
²) From Capernaum.
³) One’s native country‭; one’s fatherland; one’s own country; one’s own native place i.e. a city. ‭ For Jesus this was Nazareth, where he had been brought up.
⁴) Pupils.

The evangelist clearly makes a connection between this passage and the previous one in this verse. Namely, he remarks that Jesus left ‘from there’. With that word hence he refers to the house of Jairus, the ruler of the synagogue in Capernaum.
In Mark 5:39 we read that Jesus entered that house. Now we are told that He left that house. He withdrew from the enthusiastic shout of the crowd.

As in the same breath, Mark adds that Jesus came to His hometown. So he did not return to the coast (Mark 4:1; 5:21), but went to Nazareth.
There is no doubt that the evangelist is referring to Nazareth by ‘father city’ (patris, lit. ‘fatherland’, cf. Matthew 13:54, here chosen in connection with Mark 6:4).

To get to Nazareth, the Lord Jesus had to cover a distance of about 40 kilometers, a brisk day’s march. His disciples went with Him.

Possibly Jesus consciously went to His hometown to show His disciples after the signs He has done the reverse side, that of unbelief.

So we read here that the Christ makes a visit to his own country, the place not of his birth, but of his education; that was Nazareth; where his relations were.
He had been in danger of his life among them (Luke 4:29), and yet he came among them again; He in His grace towards sinners really seeks the salvation of his enemies.

Wherever He went, even when it was into danger, his disciples followed him (Mark 6:1); for they had left all, to follow him wherever He went. 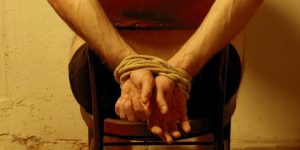