Proverbs 9:10
The fear of the Lord is the beginning of wisdom, And the knowledge of the Holy One is understanding.

I still hear them say:
● “There is a new ice-age coming. Around the year 2000 big parts of the northern hemisphere will be covered under a thick layer of ice, and those who are still alive will be fighting a terrible famine”
○ Lots of people were afraid, some even made an end to their life because of the coming ice-age, but nothing happened. The ice-age we would be in right now, never came.

● Then acid rain would cause that by 2010 there would be a worldwide famine as all vegetation would die because of it. There would be no vegetables to eat left by 2010
○ But around 2010 nobody was talking about acid rain anymore, and the plants are still green

● Then there was a hole in the ozone layer, and everyone had to change their refrigerator because of CFK’S, otherwise you would die on nuclear radiation from space, and the sun.

● And now it is global heating. And the rising of water levels in the oceans by three meters. Complete islands, and coastal areas will disappear under water by 2040.
○ I don’t know why, but it seems they want people to live in fear.

The Bible tells us that the beginning of wisdom is found in the fear of the Lord (Proverbs 9:10).
But those wise and learned people say they know better. And they, and those who believe them, continually live in fear.

Mankind is looking for wisdom in many worthless and futile places, while they will not accept that the ultimate wisdom is found only when we intentionally humble ourselves before God, giving him the reverence and honor that belongs to Him, and offer Him the worship He deserves.

But people still only trust their own ideas (or knowledge), even when they see that their predictions are continually wrong.

Prayer suggestions :
▪ Ask God to forgive us our ignorant arrogance, thinking that we know it all.
▪ And ask God to lead us in the way of His wisdom. 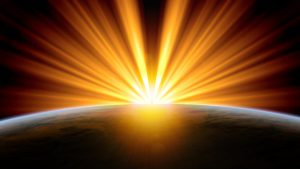 Shine your light before men