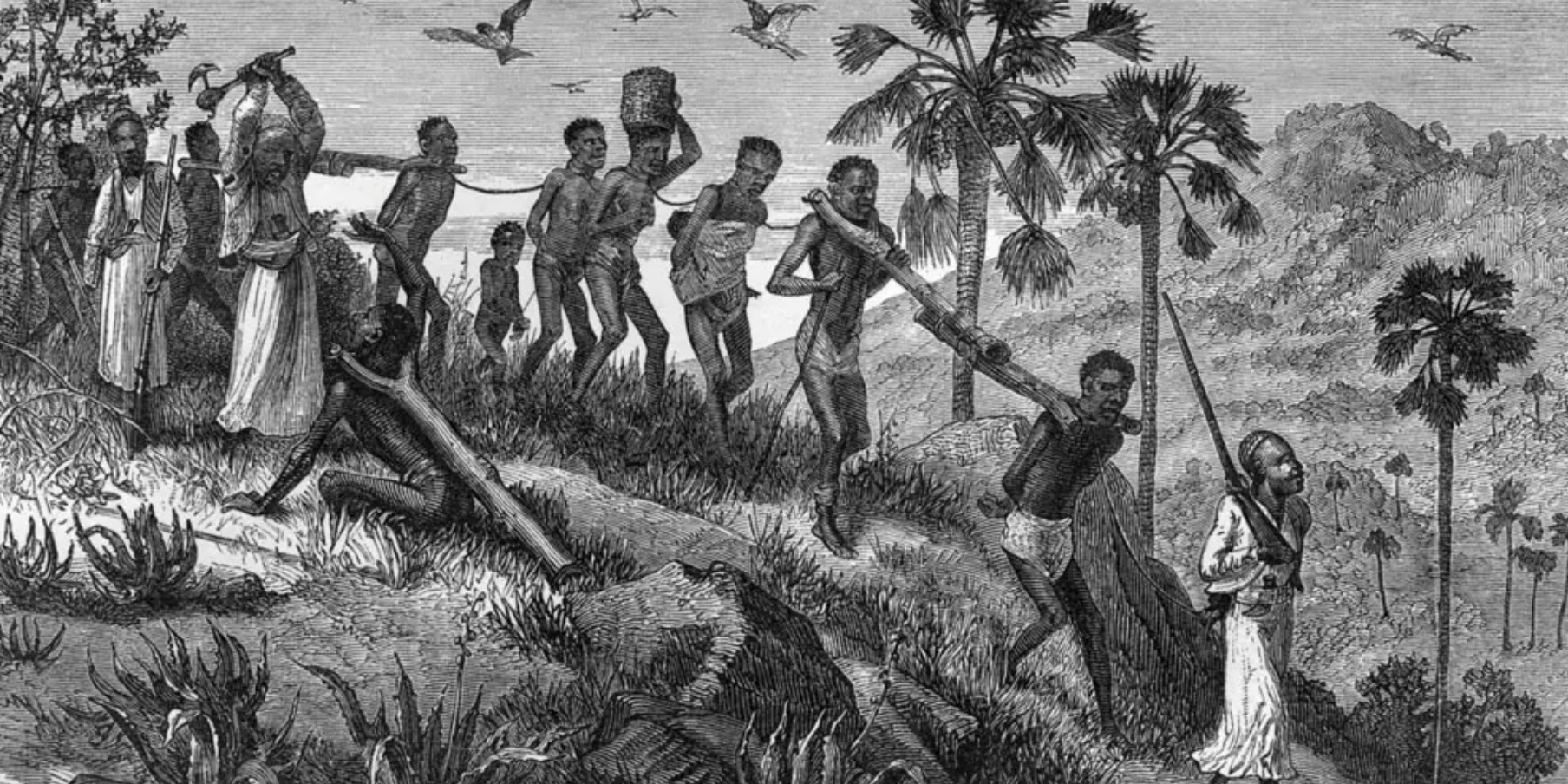 It happened quite a few years ago, somewhere on the west coast of Africa.
The tribe that lived there still had the custom of keeping slaves. The chief of the tribe, a certain Libé, owned a large number of them.

One day, Garra, one of the young slaves, was accused of casting a spell on the chief’s son. However he tried to prove his innocence, it did not help. He would be punished. Libé declared that he deserved the death penalty. What could Garra do now? He decided to run.

In the middle of that night he managed to escape.
He ran as fast as he could into the woods, swam across a river, and ran on again.
But of course it was not long before his flight was discovered.

Libé was furious and immediately called a few men together to pursue Garra. Garra went by leaps and bounds through the dense bushes. The sharp thorns injured his body, but he didn’t care. But he did feel his legs getting tired.

Suddenly he heard dogs barking. They were still on a distance, but he understood that Libe’s dogs were after him. Closer and closer they followed him. What now? Garra did everything he could.

Suddenly he was standing in front of a wide river. He didn’t think twice, jumped into the water and swam across.

But then he could no longer continue. Totally exhausted, he fell to the ground.
Almost at the same time he cried out in pain, for an arrow from his pursuers had hit him in the leg. Now Garra knew he was lost. Libé cheered, and swam across the river with his helpers.

And then something happened that no one had expected: a man emerged from the undergrowth, a white man! The dripping-wet pursuers running toward Garra stopped and took a few steps back, startled.
They wanted to kill Garra, but they were far too afraid of that white man, because keeping slaves was forbidden by the government. They understood that he wanted to protect the slave.

The white man approached the chief. He kindly offered to buy Garra from him. Libé’s fear subsided and he refused. He didn’t want to sell Garra. He wanted to kill him. He wanted to get even.

Suddenly he bent his bow. An arrow whizzed through the air and would have hit Garra if … the white man hadn’t reached out! The arrow entered his arm. Large drops of blood fell to the ground.

“O son of the sea!” cried the chief, “my heart is sad. Libé did not want to touch you”. He looked at the blood with frightened eyes. Surely he was going to be killed by that creepy white man. But he replied, “I have now bought your slave with my blood. Give him to me, and there will be peace between you and me.” Relieved, Libé took a breath and agreed. Then he and his men got away.

And Garra? He crawled to his rescuer and whispered, “Garra bought with your blood will always be a good slave to his master.”
“No” said the white man, “you are free. We do not keep slaves”.

“Free?” cried the man, “Let me always serve my master, for he bought me with his blood!”

Garra’s leg wound healed quickly. The white man, a missionary, told him a lot from the Bible. But Garra couldn’t understand. “To difficult!” he said over and over.
He often looked at the scar on the missionary’s arm. One day he asked: “Why did massa (inland word for lord, master) suffer so much pain for Garra? Because Garra was only a slave”. – Yes that is true.

But do you know that Massa used to be a slave himself and was saved by another Massa? That’s why I love Him, but I love you too and wanted to help you.
“No, that is not possible. Massa is a white man and therefore never been a slave.”

Then the missionary began to explain that all people are slaves. Slaves to sin and the devil. Sin is the evil you have done. Therefore, all people, including you, are under the power of that enemy, the devil; just as you were in the power of Libé.

No one can escape him, because he is strong and shoots his poisonous arrows everywhere. I used to be in the power of the devil too.

“And who then saved massa?” Garra asked.
“That’s what my Massa, the Lord Jesus did.
To do that He had to die on the cross, and there suffer the punishment that I had earned for all my sins. You know my arm was hit by the arrow and was bleeding That’s what saved you.
Thus the Lord Jesus gave His blood on the cross to save us. He saved me and wants to be your Savior too ”.

“So the Lord Jesus is the Savior of my massa?
Could I also be saved by Him?”

“Yes, if you tell the Lord Jesus your sins. He wants to save you. He now lives in heaven and hears everyone who prays to Him and believes in Him”.

“Oh, I want to do that, because I would also like to belong to Him. Then I want to love Him too!” Garra exclaimed.

Since that day, Garra liked to listen to everything the missionary told him about the Lord Jesus. And it was not long before he realized that he was also a sinner in need of a Savior. Once his massa had bought him with his blood, but now he knew that the Lord Jesus had given His blood for him too, and had bought him, to save him forever!