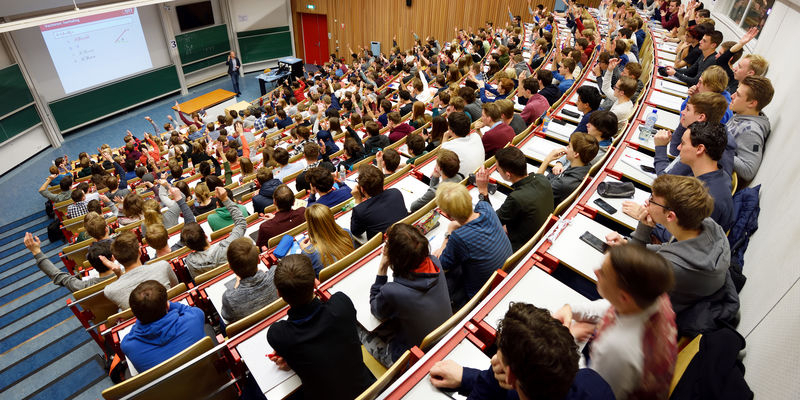 The professor often gave an opportunity to debate during the lecture.
While searching together for a new topic for debate, one student mentioned: the Bible. The professor himself did not care about the Bible, and neither did most students. One young man was a decidedly Christian, and he was not ashamed to express his beliefs.

The professor thought it was a good idea, and suggested that the believing young man be given an opportunity to present his views. After that, another student would prove the Bible’s unreliability. This proposal was generally welcomed, and both students were given sufficient time to study and write down their theme.

One prepared in prayer. The promise of James 1:5, “When any of you lacks wisdom, ask it of God, who gives generously to everyone” was a great encouragement to him.

When the appointed hour came, he quietly walked forward, clearly stated his position, and substantiated his conviction with the Holy Scriptures and with his own experience. The professor and the students listened quietly without interrupting him.

Then it was the turn of the opponent. He said: “I did not find it necessary to write down my thoughts on the theme set, but I would like to communicate to you orally the result of my research.

I spent many, many hours reading the Bible examining it for its unreliability. I have searched with effort for inconsistencies, but have not found any.
I even read the New Testament several times. The more I read and studied the book, the more convinced I was not dealing with a human book. I found what is said in the Bible so lofty and penetrating that I was overcome by a sense of condemnation.
It seemed like this book was written just for me.

I became convinced of the truth of the Bible, came to recognize my sin and foolishness, and now I believe in the Bible as the Word of God. And not only do I believe that the Bible is God’s Word, but now I also believe in the Lord Jesus Christ, whom I have accepted as my personal Savior. “

One can imagine what a sensation this open and clear testimony caused. The professor turned pale, but said nothing.
Most of the students were also deeply impressed by what they had heard. The professor got up, declared the class over, and let the young people go.

Do you also belong to the people who condemn the Bible without having read it. Would you also like to read the Bible sincerely, honestly, and without prejudice?
Give her the opportunity to radically change your life and make you happy now and forever!