Romans 08.15 KJV
For ye have not received
the spirit of bondage again to fear;
but ye have received
the Spirit of adoption,
whereby we cry, Abba, Father.

New Living Translation
So you have not received a spirit that makes you fearful slaves. Instead, you received God’s Spirit when he adopted you as his own children. Now we call him, “Abba, Father.”

English Standard Version
For you did not receive the spirit of slavery to fall back into fear, but you have received the Spirit of adoption as sons, by whom we cry, “Abba! Father!”

Berean Study Bible
For you did not receive a spirit of slavery that returns you to fear, but you received the Spirit of sonship, by whom we cry, “Abba! Father!”

Berean Literal Bible
For you have not received a spirit of bondage again to fear, but you have received the Spirit of divine adoption as sons, by whom we cry, “Abba! Father!”

New King James Version
For you did not receive the spirit of bondage again to fear, but you received the Spirit of adoption by whom we cry out, “Abba, Father.”

Amplified Bible
For you have not received a spirit of slavery leading again to fear [of God’s judgment], but you have received the Spirit of adoption as sons [the Spirit producing sonship] by which we [joyfully] cry, “Abba! Father!”

The Greek corresponds very nearly to what we should naturally understand by the English phrase, “such a spirit as would be found in slaves.”

The word “spirit” varies much in meaning in these verses.

So as to take you back under the old terrorism of the Law. The Law, if it contained promises, was still more essentially a system of threats; for the threats took effect, while the promises remained ineffectual, because the Law could not be fulfilled.

Again to fear, so you should again be afraid, or be subjected to servile fear.

This implies that in their former state under the Law, they were in a state of servitude, and that the tendency of it was merely to produce alarm.

Every sinner is subject to such fear.
He has everything of which to be alarmed.
God is angry with him; his conscience will trouble him; and he has everything to apprehend in death and in eternity.

But it is not so with the Christian (compare 2 Timothy 1:7).

That spirit which is characteristic of those who are taken to be sons, who, like the Christian at his baptism, are admitted into this relation of sonship.

The feeling of affection, love, and confidence which pertains to children; not the servile, trembling spirit of slaves, but the temper and affectionate regard of sons.

Adoption is the taking and treating a stranger as one’s own child.
It is applied to Christians because God treats them as His children; He receives them into this relation, though they were by nature strangers and enemies.

The intensity of the Apostle’s feeling comes out in this simple definition.
Instead of any more formal elaboration of his meaning, he says the Spirit of adoption is that which prompts the impassioned cry, “Abba, Father.”

As children who need protection and help.
This evinces the habitual spirit of a child of God; a disposition,

“Abba” is the Aramaic equivalent for father.
The repetition is probably one of endearment and entreaty, taken from the natural impulse of children to repeat a beloved name in different forms.

Abba This word is Chaldee (אבא abba), and means “father.”

Why the apostle repeats the word in a different language, is not known.
The Syriac it reads. “By which we call the Father our Father.”

It is probable that the repetition here denotes merely intensity, and is designed to denote the interest with which a Christian dwells on the name, in the spirit of an affectionate, tender child.

It is not unusual to repeat such terms of affection (compare Matthew 7:22;  Psalms 8:1).
This is an evidence of piety that is easily applied. He that can in sincerity, and with ardent affection apply this term to God, addressing him with a filial spirit as his Father, has the spirit of a Christian.

Every child of God has this spirit; and he that has it not is a stranger to piety.

For ☆ γὰρ (gar) ☆ Conjunction ☆ For. A primary particle; properly, assigning a reason.

That returns you ☆ πάλιν (palin) ☆ Adverb ☆ Probably from the same as pale; anew, i.e. back, once more, or furthermore or on the other hand.

Fear ☆ φόβον (phobon) ☆ Noun – Accusative Masculine Singular ☆ (a) fear, terror, alarm, (b) the object or cause of fear, (c) reverence, respect. From a primary phebomai; alarm or fright.

But ☆ ἀλλὰ (alla) ☆ Conjunction ☆ But, except, however. Neuter plural of allos; properly, other things, i.e. contrariwise.

Of sonship ☆ υἱοθεσίας (huiothesias) ☆ Noun – Genitive Feminine Singular ☆ From a presumed compound of huios and a derivative of tithemi; the placing as a son, i.e. Adoption. 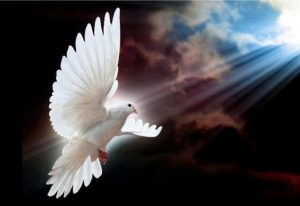