Matthew 8:23
And when he was entered into a ship,
his disciples¹ followed² him.

Berean Literal Bible
And He having entered into the boat, His disciples followed Him.

New King James Version
Now when He got into a boat, His disciples followed Him.

New American Standard Bible
When He got into the boat, His disciples followed Him.

The two narratives that follow are brought together in all three Gospels; but Mark and Luke place them, after the parables which Matthew gives in chapter 13

Entered into a ship.

The better manuscripts give, as often elsewhere, “the ship,” or boat; the one which, belonging possibly to Peter, or the sons of Zebedee, was always ready at their Master’s service.

Mark adds that “they took Him, even as He was, in the boat,” the words indicating apparently extreme exhaustion from the fatigue of teaching.
This, we learn, was followed by immediate sleep as He lay in the stern on the boat’s cushion as a pillow.

In the following verses we read an account of the disciples’ journey, with Jesus aboard their little boat.
The story forces us to think of the similarities between their journey across the lake and our life journey.

For us, too, life is a crossing.
For some the journey is short, for others a little longer, but for everyone there is a journey to the other side!
Do you already know where you will eventually land?

There is but one ship in which we can safely sail, and in which we shall reach the place of eternal rest. That is the boat of the faithful Lord, who always leads us safely. Behold, He invites you into His ship!

Do you refuse to trust Him?

The Lord however, has pledged His love and faithfulness, for your safe homecoming.
He also calms the storms in your heart.

Let us therefore seek Him today, who can command ‘great silence’ for us too. 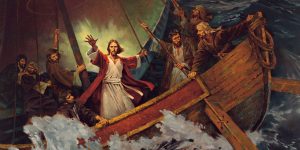 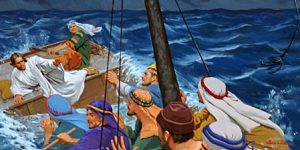