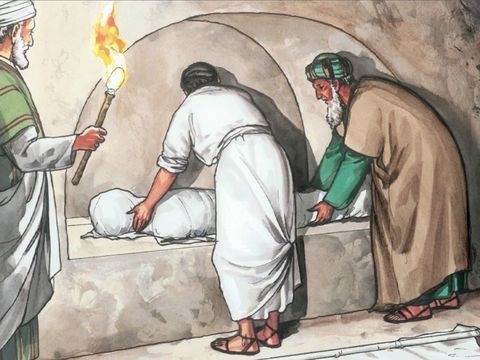 Mark 15:42-47
⁴²When evening had already come, because it was the preparation day, that is, the day before the Sabbath, ⁴³Joseph of Arimathea came, a prominent member of the Council, who himself was waiting for the kingdom of God; and he gathered up courage and went in before Pilate, and asked for the body of Jesus.
⁴⁴Pilate wondered if He was dead by this time, and summoning the centurion, he questioned him as to whether He was already dead. ⁴⁵And ascertaining this from the centurion, he granted the body to Joseph.
⁴⁶Joseph bought a linen cloth, took Him down, wrapped Him in the linen cloth and laid Him in a tomb which had been hewn out in the rock; and he rolled a stone against the entrance of the tomb. ⁴⁷Mary Magdalene and Mary the mother of Joses were looking on to see where He was laid.

Jesus clears a way through death to life

Where are the disciples of Jesus anyway? We don’t hear anything anymore from
them.
▪︎ Shouldn’t one of them have carried the cross for their Master (Mark 15:21)?
▪︎ Shouldn’t they have taken care of his body? Now His body is being cared for by someone we had never heard of: a certain Joseph of Arimathea (Mark 15: 42,43,46). A stranger suddenly has the courage to show sympathy for Jesus.

Until now, people have only violated Jesus. Now He changes hands. So here is already something of a turn to be seen (Isaiah 53:9). Here is a turning point that will culminate in Jesus’ resurrection.

Precisely in connection with this, it is of great importance that it has been officially established that Jesus really died. Pilate examines this very carefully (Mark 15:44,45). Apparently crucified people only died after a long time.
The lives of those who hung next to Jesus have been forcibly ended. But that was not necessary with Jesus (John 19:31-34). “No one takes life away from Me, I give it of my own free will,” He had said (John 10:18, Willibrordtranslation 1995).
Jesus died for love for us. That is what makes his death so precious.

Pilate gives Joseph permission to dispose of the body of Jesus.
Normally the bodies of the crucified were burned. But Jesus is given an honorable burial. Jesus is now among the dead. He is now one with those who have died. He has descended to that depth.

It will be impossible for death to hold Him (Acts 2:24). But there, in the realm of death, He has been. His resurrection is always called a resurrection from the dead (eg in 1 Corinthians 15:20). That means: from among the dead.

Some women are again the witnesses. Also on our behalf they have seen everything with their own eyes (Compare 1 John 1:1-4). By the way, you can never be a spectator alone at a grave.
We will also be buried one day. But Jesus has gone before us.
His footsteps glitter in the darkness of death. He makes a way through death to life (Psalms 16:8-11; Acts 2:25-32; Compare Romans 6:22,23).

▪︎ What happened to your life because of Jesus’ suffering, death, and resurrection? (Compare Romans 6:1-7)

▪︎ Thank the Lord Jesus for His suffering and death.