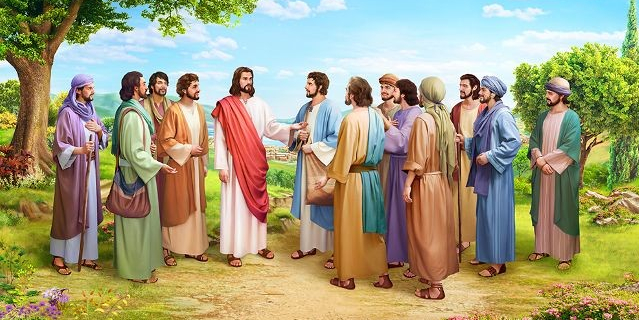 Mark 10:33 AV
Saying‭, ‭Behold, we go up to¹ Jerusalem;
and the Son of man
shall be delivered² unto the chief priests,
and unto the scribes;
and they shall condemn³ him to death⁴,
and shall deliver him to the Gentiles:‭

¹) Into, unto, to, towards, for, among.
²) To give into the hands (of another)‭; to give over into (one’s) power.
³) Give judgment against Him; judge Him worthy of punishment‭.
⁴) The death of the body‭; the separation of the soul and the body by which the life on earth is ended‭.

We go up to Jerusalem

They were now upon the road going there.

He was going there for the last time, and there “all things that are written by the prophets concerning the Son of man shall be accomplished” (Luke 18:31).

The Son of man shall be delivered unto the chief priests and unto the scribes; and they shall condemn him to death, and shall deliver him to the Gentiles

This is the first express statement that the Gentiles would combine with the Jews in His death; the two grand divisions of the human race for whom He died thus taking part in crucifying the Lord of Glory.

This term is used by the Christ Himself, doubtless in order that He might intimate his Messiahship and also that He might designate Himself as the head of the human family, the man, the one who both furnished the pattern of the perfect man and acted on behalf of all mankind. Jesus seems to have preferred this one above the other Messianic titles, because by its lowliness it was least suited to foster the expectation of an earthly Messiah in royal splendour.‭

Jesus designates Himself as the Son of man about eighty times.
▪︎ It is His racial name as the representative Man, in the sense of 1 Corinthians 15:45-47
▪︎ as Son of David is distinctly his Jewish name,
▪︎ and Son of God His divine name.

When Nathanael confesses him as “King of Israel,” our Lord’s answer is, “Thou shalt see greater things. . . the angels of God ascending and descending upon the Son of man.”

When His messengers are cast out by the Jews, His thought leaps forward to the time when the Son of man shall come, not then to Israel only but to the race (Matthew 10:5,6,  8:23).

Jesus would be delivered to them by the determinate counsel, and foreknowledge of God, and by the means of a treacherous disciple of Him, named Judas Iscariot.

The Latin Vulgate version adds, “and to the elders”; but this is not in any of the copies, nor in other versions.

The chief priest, or high priest‭, was honoured above all others, with the title of priest. He was the chief of priests.

It was lawful for him to perform the common duties of the priesthood; but his chief duty was, once a year on the day of atonement, to enter into the Holy of Holies (from which the other priests were excluded) and offer sacrifices for his own sins and the sins of the people, and to preside over the Sanhedrin, or Supreme Council, when convened for judicial deliberations.

According to Mosaic law, no one could aspire to the high priesthood unless he were of the tribe of Aaron and descended from a high priestly family; and he on whom the office was conferred held it till death.
But from the time of Antiochus Epiphanes, when the kings of Seleucideae and afterwards the Herodian princes and the Romans arrogated to themselves the power of appointing the high priests, the office neither remained vested in the pontifical family nor was conferred on any for life; but it became venal, and could be transferred from one to another according to the will of civic or military rulers.

Hence it came to pass, that during the one hundred and seven years intervening between Herod the Great and the destruction of the holy city, twenty–eight persons held the pontifical dignity.‭

The title is also used for the Christ because by undergoing a bloody death he offered himself as an expiatory sacrifice to God, and has entered into the heavenly sanctuary where he continually intercedes on our behalf.‭

In the Bible, a scribe, is a man learned in the Mosaic law, and in the sacred writings, he is an interpreter, and a teacher.
Scribes examined the more difficult and subtle questions of the law; added to the Mosaic law decisions of various kinds thought to elucidate its meaning and scope, and did this to the detriment of religion.
Since the advice of men skilled in the law was needed in the examination in the causes and the solution of the difficult questions, they were enrolled in the Sanhedrin; and are mentioned in connection with the priests and elders of the people.

And they shall condemn Him to death

And shall deliver Him to the Gentiles

The Gentiles, that were the Romans, to Pontius Pilate, the Roman governor; either because they had not then power to put Him to death themselves, or because they were desirous He should die the death of the cross, a Roman punishment.

For the third time, Jesus speaks out about the suffering that awaits Him. Compared to the first two agony announcements (Mark 8:31, 9:31), the third announcement of suffering (Mark 10:33,34) contains the following new elements:

The Lord leads His disciples to Jerusalem.
They were amazed because they were afraid.
They feared what could come next.
Fear of suffering that could befall the Master.
Also fear of what people might do to them.

Jerusalem was the city of religion.
There were the temple buildings, but they did not harm man.

But there were also the chief priests and the scribes, the Pharisees and the Sadducees, they were the dangerous evildoers.
They were the enemies of free grace.

No, not the Roman soldiers, because they didn’t interfere with all these things.
Not even the publicans and sinners, their interests lay elsewhere.
But the spiritual leaders, those were the enemies.

To the eye neat people,
To the eye considerable people.
They didn’t come out of the fold so easily; according to the law they thought they were blameless. They were serious people.

They kept a close eye on the distinction between church and world.
But … Yet from the very beginning they were enemies of grace, enemies of Jesus.

In good spirits Jesus walks His way.
“Behold”, thus saith he unto his disciples, “we go up to Jerusalem”.
He goes cheerfully to the city of His murderers.

Why this cheerfulness?
It is His Father’s will that He walks this path!