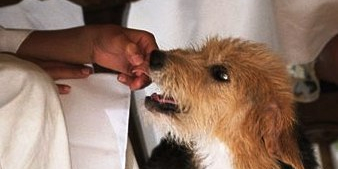 Mark 7:28 (AV)
And she answered and said unto him,
Yes, Lord: yet the dogs¹ under the table
eat of the children’s crumbs.‭

Jesus gives in His reply (Mark 7:27) this woman the opportunity to show her faith, and to show that she understands why the Lord has come on earth.

Now let us observe what happened in these verses.
A poor woman in distress and trouble made an application to Him.
She was
▪︎ a Gentile, a Greek,
▪︎ a stranger to the commonwealth of Israel,
▪︎ an alien to the covenant of promise;
▪︎ she was by extraction a Syrophenician, and not in any degree proselyted to the Jewish religion.

She had a daughter, a young daughter, that was possessed with the devil.
How many and grievous are the calamities that young children are subject to!

● Observe that her address to Jesus was very humble, pressing, and importunate.
She heard of him, believed, came, and fell at his feet (Mark 7:25)
》 Note that those that want to obtain mercy from Christ,
▪︎ must throw themselves at His feet;
▪︎ must refer themselves to him,
▪︎ must humble themselves before him,
▪︎ and must give up themselves to be ruled by him.
》 Note that the Christ never put anyone away from Him, that fell at his feet, which any poor trembling soul may do, that has not the boldness and confidence to throw himself into His arms.

● Observe that her address to Jesus was very particular: she tells Him what she wanted.
The Christ always gave, and still gives poor supplicants leave to be this free with Him. She prayed from Him that He would cast the devil out of her daughter (Mark 7:26)
》 Note, that the greatest blessing we can ask of the Christ for our children is,
▪︎ that He would break the power of Satan, that is, the power of sin, in their souls;
▪︎ and particularly, that He would cast out the unclean spirit,
▪︎ that they may be temples of the Holy Ghost,
▪︎ and that He may dwell in them.

● Observe the discouragement He gave on this woman’s request (Mark 7:27).
He said unto her:
“Let the children first be filled; let the Jews have all the miracles done for them, who are in a particular manner God’s chosen people;
And let not that which was intended for them, be thrown to those
▪︎ who are not of God’s family,
▪︎ who have no knowledge of Him,
▪︎ who have no interest in Him, like they have,
▪︎ and who are as dogs in comparison of them, vile and profane,
▪︎ and who are as dogs to them, snarling at them, spiteful toward them, and ready to worry them.’’
》 Note, Where Christ knows the faith of poor supplicants to be strong, he sometimes still tries it, and put it to the stretch.

But His saying, Let the children first be filled, intimates that there was mercy in reserve for the Gentiles, and not far off, for the Jews began already to be surfeited with the gospel of the Christ, and some of them had desired Him to depart out of their coasts.
The children begin to play with their meat, and their leavings, would be a feast for the Gentiles. The apostles went by this rule, Let the children first be filled, let the Jews have the first offer; and if their full souls loathe this honeycomb, then we turn to the Gentiles!

● Observe the turn she gave to this word of the Christ.
Although the Christ’s answer was clearly made against her, she approved of it.
Showing that she knew her place (Mark 7.28).
She said, “Yes, Lord, I own it is true that the children’s bread ought not to be cast to the dogs; but they were never denied the crumbs of that bread that fell from the table. Those crumbs are for them, and they are allowed a place under the table, that they may be ready to receive them. I ask not for a loaf, no, nor for a morsel, only for a crumb; do not refuse me that.’’
This she speaks, not as undervaluing the mercy, or making light of it in itself, but magnifying the abundance or miraculous cures with which she heard the Jews were feasted, in comparison with which a single cure was but as a crumb.
Gentiles do not come in crowds, as the Jews do; I come alone. Perhaps she had heard of the Christ feeding the five thousand at once lately, after which, even when they had gathered up the fragments, there could not but be some crumbs left for the dogs.

● Observe how the Christ upon this, granted her request.
Because she was humble, and earnest enough to give such an answer Jesus said to her “Because of this answer go; the demon has gone out of your daughter.” (Mark 7:29)
This encourages us to pray and not to faint, to continue instant in prayer, not doubting but to prevail at last; the vision at the end shall speak, and not lie.
Christ’s saying that is was done, did it effectually, as at other times his saying, Let it be done; for (Mark 7:30) she came to her house, depending upon the word of Jesus, that her daughter was healed, and so she found it, the devil was gone out.
》 Note that the Christ can conquer Satan at a distance; and it was not only when the demoniacs saw him, that they yielded to his power (as in Mark 3:11), but when they saw him not, for the Spirit of the Lord is not bound.
She found her daughter not in any toss or agitation, but very quietly laying on the bed, and reposing herself; waiting for her mother’s return, to rejoice with her, that she was so finely well.

How small this pagan woman has become.
She has heard that the Lord Jesus is in the area and she has heard how He can heal. And she put faith in what was told her, and not only that, she acted on her faith.

She has a daughter who is possessed by the devil.
And so she comes to the Savior and begs Him to deliver her daughter from that devil, so that the child will be well again.

However, the Lord says that He cannot take the bread out of the children’s mouth – and that was Israel – and give it to the Gentiles. Then comes such a wonderful answer. The children sometimes spill crumbs on the floor and then the dogs are allowed to eat them too.

The Gentiles were just dogs in the eyes of Israel.
She is now using the same words, and accepting that it is for the Jews. She wants to be so small before God, she wants to humble herself so deeply, but can she eat of the crumbs?

The Lord Jesus is deeply affected by it.
Besides, most in Israel crumbled the Bread that was given them in the Christ. Because they did not accept the message of the Messiah, it is to us the Gentiles.

Let it sink in that the overwhelming grace and love that we are now experiencing are the crumbs that have fallen from the table of the Jewish people.
What an abundance they will soon be allowed to experience, when they start to eat of the true Bread that has come for them!

The child becomes healthy.
What a message for us too! 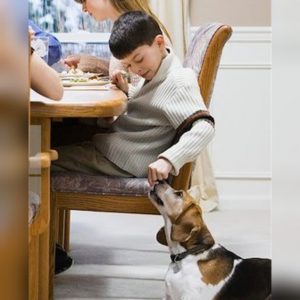 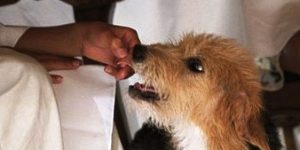 The Syrophoenician Woman (1 of 3)