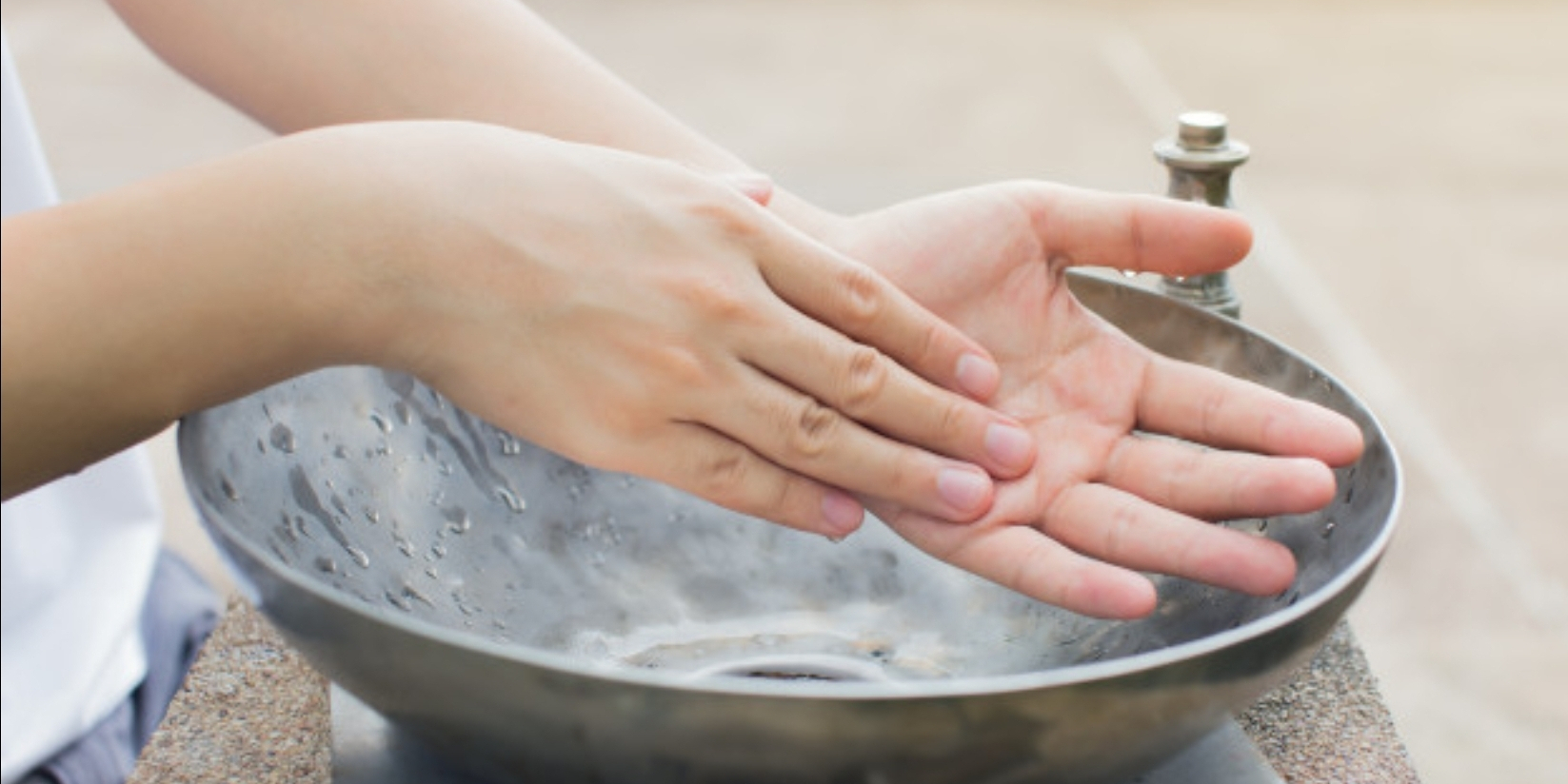 Mark 7:4 (AV)
And ‭when they¹ come‭ from the market²,
except they wash³, they eat not.
And many other things there be,
which they have received⁴ to hold⁵,
‭as‭ the washing of cups, and pots,
brasen vessels, and of tables⁶

¹) The Pharisees and the scribes.
²) The word used here points to any collection of men, congregation, or assembly, especially of the people‭.
³) The Greek word βαπτίζω‭ (baptizo) occurs in the Amplified Version 80 times, and is only twice translated as ‘to wash’. 76 times it is translated as ‘to baptize’. The meaning of the word is: ‭‭To dip repeatedly, to immerse, to submerge (of vessels sunk)‭; or like in this case to cleanse by dipping or submerging the hands, to wash, to make clean with water, to wash.
⁴) Joined to themself.
‭⁵) To have power, to be powerful‭.
⁶) This is the only time in the Amplified Version that the Greek word κλίνη‭ (kline) ‭is translated as ‘table’. The 9 other times it occurs, it is translated as ‘bed’. The word points to a small bed, or a couch‭ to recline on at meals‭.

One of the great designs of Christ’s coming, was, to put an end to the ceremonial law which men had made, and He discharges his disciples from the obligation to follow that; which here He does fully here, where the Pharisees took offence when the disciples violated their man-made law.

These Pharisees and scribes, with whom He had this argument, are said to come from Jerusalem down to Galilee. Imagine, they traveled (walked) a hundred miles, just to pick up quarrels with our Saviour.
Had they come so far to be taught by him, their zeal had been commendable; but to come so far to oppose Him, and to check the progress of His gospel, was great wickedness.

It should seem that the scribes and Pharisees at Jerusalem pretended not only to a pre-eminence above, but to an authority over, the country clergy, and therefore kept up their visitations and sent inquisitors among them, as they did to John when he appeared (John 1:19).

Observe what the tradition of the elders was: by it all were enjoined to wash their hands before meat; a cleanly custom, and no harm in it; and yet as such to be over-nice in it discovers too great a care about the body, which is of the earth; but they placed religion in it, and would not leave it indifferent, as it was in its own nature; people were at their liberty to do it or not to do it; but they interposed their authority, and commanded all to do it upon pain of excommunication; this they kept up as a tradition of the elders.

Observe that they particularly washed before they ate bread; that is, before they sat down to a solemn meal; for that was the rule; they must be sure to wash before they ate the bread on which they begged a blessing. “Whosoever eats the bread over which they recite the benediction, ‘Blessed be He that produceth bread’, must wash his hands before and after,’’ or else he was thought to be defiled.

Observe that they took special care, when they came in from the markets, to wash their hands; from the judgment-halls, so some; it signifies any place of concourse where there were people of all sorts, and, it might be supposed, some heathen or Jews under a ceremonial pollution, by coming near to whom they thought themselves polluted; saying, Stand by thyself, come not near me, I am holier than thou, Isaiah 65:5 .

They say, The rule of the rabbies was — That, if they washed their hands well in the morning, the first thing they did, it would serve for all day, provided they kept alone; but, if they went into company, they must not, at their return, either eat or pray till they had washed their hands; thus the elders gained a reputation among the people for sanctity, and thus they exercised and kept up an authority over their consciences.

Observe that they added to this the washing of cups, and pots, and brazen vessels, which they suspected had been made use of by heathens, or persons polluted; as well as the very tables on which they ate their meat.
There were many cases in which, by the law of Moses, washings were appointed; but they added to them, and enforced the observation of their own impositions as much as of God’s institutions.

It was already an ancient statute in Israel that whoever went to supper should first wash his hands and feet. In every house were the vessels for cleaning.
In itself this was a good habit, which could only benefit hygiene and external well-being. But there was the danger that this outward cleansing was now regarded as an inward cleansing.

If people came from the market and had they there, without knowing it, touched something unclean, well then they washed their hands and they were clean again.
But …, they did not ask how things were now on the inside, and whether the heart was also cleansed of all stains that it had acquired in dealing with others, or had arisen from within themselves.

This old thought of the Pharisees is involuntarily in all of us.
We so often and so gladly be satisfied with the outward appearance.
If it all looks fine on the outside.
▪︎ As long as we are baptized,
▪︎ attended the catechism,
▪︎ have made confession,
▪︎ attend Bible study meetings,
▪︎ do not skip the meetings,
then it will be okay with us… Will it..?

What we should be concerned about in the first place is whether our hearts are cleansed from all filthy sins!