Micah 6:5 KJV
O my people, remember now
what Balak king of Moab consulted,
and what Balaam the son of Beor answered him
from Shittim unto Gilgal;
that ye may know the righteousness of the Lord .

My people, please remember the bad things that King Balak of Moab tried to do. And remember what Balaam, Beor’s son, answered him (Numbers 22-24). Remember your journey from Shittim to Gilgal (Joshua 3-4). Then you will remember that I, the Lord, do good things.

What Balak … consulted
How Balak plotted to destroy thee by getting Balaam to curse thee (Numbers 22:5).

What Balaam … answered
How the prophet was constrained against his own will, to bless Israel whom he had desired to curse for the sake of Balak’s reward (Numbers 24:9-11) [MAURER].
GROTIUS explains it, “how Balaam answered, that the only way to injure thee was by tempting thee to idolatry and whoredom” (Numbers 31:16).
The mention of “Shittim” agrees with this: as it was the scene of Israel’s sin (Numbers 25:1-5, 2 Peter 2:15, Revelation 2:14).

From Shittim unto Gilgal
Not that Balaam accompanied Israel from Shittim to Gilgal: for he was slain in Midian (Numbers 31:8). But the clause, “from Shittim,” alone applies to Balaam.

“Remember” God’s kindnesses “from Shittim,” the scene of Balaam’s wicked counsel taking effect in Israel’s sin, whereby Israel merited utter destruction but for God’s sparing mercy, “to Gilgal,” the place of Israel’s first encampment in the promised land between Jericho and Jordan, where God renewed the covenant with Israel by circumcision (Joshua 5:2-11).

Know the righteousness
Recognize that, so far from God having treated thee harshly (Micah 6:3), His dealings have been kindness itself (so “righteous acts” for gracious, Judges 5:11, Psalms 24:5, 112:9 ).

Later it is the prophet Micah who reminds Israel of Balaam.
It was God Who thwarted the curse Balak had planned for Israel, and had Balaam instead speak a blessing.

But what has Israel done?
Has it answered God’s blessing and protection in obedience?
We know how history has continued…

Yet we miss the point if we dwell on Israel’s history, and think only of their disobedience.

How about ourselves?
How have we done during the past week?
Was it noticeable that we started the week with God’s blessing?
Have we answered God’s blessing and protection in obedience?

Where obedience is lacking, the blessing is at stake.
All the Old Testament tells us that.

But it says more!
It is full of the expectation that Balaam had already expressed: that a star will rise from Jacob and a scepter from Israel – for the salvation of the world! 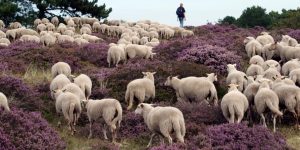