Luke 2:9
And an angel of the Lord suddenly stood before them,
and the glory of the Lord shone around them;
and they were terribly frightened.

What a huge contrast to the poor manger in that shabby stable.

In the darkness of the night, where death threatens their sheep, they kept watch.
You can imagine how they must have been shocked and scared when they were suddenly shone about by the glory of the Lord, and the angel visited them.

They were illuminated by a light of heavenly origin.
The Christ entered the darkness of this world so that these despised shepherds could stand in the light of God’s presence . It was only a moment here, yet it was a foretaste of the blessed future of all God’s saints, to walk forever in the light of His love and grace.

The shepherds were placed in the light of God, and they feared with great fear. Who will ever stand in the light of God and be found pure? What person ever lived, who had to deal with this light, and did not tremble? Yet there is no reason for fear. For the Christ is born, and they may walk in Him without fear. 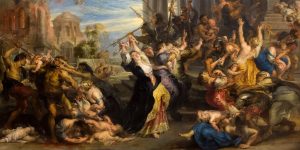