Galatians 2:20
I have been crucified with Christ;
and it is no longer I who live,
but Christ lives in me;
and the life which I now live in the flesh
I live by faith in the Son of God,
who loved me and gave Himself up for me.

Ephesians 2:1-10
¹And you were dead in your trespasses and sins, ²in which you formerly walked according to the course of this world, according to the prince of the power of the air, of the spirit that is now working in the sons of disobedience.
³Among them we too all formerly lived in the lusts of our flesh, indulging the desires of the flesh and of the mind, and were by nature children of wrath, even as the rest.
⁴But God, being rich in mercy, because of His great love with which He loved us, ⁵even when we were dead in our transgressions, made us alive together with Christ (by grace you have been saved), ⁶and raised us up with Him, and seated us with Him in the heavenly places in Christ Jesus, ⁷so that in the ages to come He might show the surpassing riches of His grace in kindness toward us in Christ Jesus.
⁸For by grace you have been saved through faith; and that not of yourselves, it is the gift of God; ⁹not as a result of works, so that no one may boast.
¹⁰For we are His workmanship, created in Christ Jesus for good works, which God prepared beforehand so that we would walk in them.

We should not think that Satan can only be found in brothels, pubs and other ‘evil’ places. He also likes to pretend to be an angel of light (2 Corinthians 11:14).
He is therefore also to be found in places where pious songs are sung by people who still walk in sins and transgressions, according to the pleasure of Satan and not according to the will of God.

Of those who now sincerely follow Jesus, is said here that they too have walked like that before, but not anymore (Ephesians 2:2).

Anyone who, when he sins, justifies himself by saying that he is but a man, that he is only human, is of the children of disobedience, who are under the dominion of the spirit of this world.
But those redeemed by Christ no longer live according to the lusts of the flesh, as they naturally do, and through which we are all children.
of wrath, ecclesiastical or unchurched!

But, praise His Name!
God, Who is rich in mercy, has made us who have become obedient, alive together with the Christ, and has seated us with Him in the heavenly places.

We become a new creation in being crucified with Christ. We have to take up our cross and follow Him
He who has been crucified with Him, notices this in being released from self, whereby he can say in amazement: “it is no longer I who live, but the Christ lives in me!”

We are His workmanship 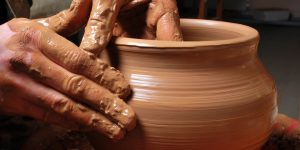 We are His workmanship