Matthew 11:29 KJV
Take my yoke upon you,
and learn of me;
for I am meek and lowly in heart:
and ye shall find rest unto your souls.

New International Version
Take my yoke upon you and learn from me, for I am gentle and humble in heart, and you will find rest for your souls.

New Living Translation
Take my yoke upon you. Let me teach you, because I am humble and gentle at heart, and you will find rest for your souls.

English Standard Version
Take my yoke upon you, and learn from me, for I am gentle and lowly in heart, and you will find rest for your souls.

Berean Study Bible
Take My yoke upon you and learn from Me; for I am gentle and humble in heart, and you will find rest for your souls.

Berean Literal Bible
Take My yoke upon you and learn from Me, for I am gentle and humble in heart, and you will find rest for your souls.

New King James Version
Take My yoke upon you and learn from Me, for I am gentle and lowly in heart, and you will find rest for your souls.

New American Standard Bible
Take My yoke upon you and learn from Me, for I am gentle and humble in heart, and YOU WILL FIND REST FOR YOUR SOULS.

NASB 1995
“Take My yoke upon you and learn from Me, for I am gentle and humble in heart, and YOU WILL FIND REST FOR YOUR SOULS.

NASB 1977
“Take My yoke upon you, and learn from Me, for I am gentle and humble in heart; and YOU SHALL FIND REST FOR YOUR SOULS.

Amplified Bible
Take My yoke upon you and learn from Me [following Me as My disciple], for I am gentle and humble in heart, and YOU WILL FIND REST (renewal, blessed quiet) FOR YOUR SOULS.

Take my yoke upon you

The yoke of subjection to Jesus.

Believe in and obey me:
▪︎ Listen to me as a teacher,
▪︎ Rely on me as a Saviour,
▪︎ And be subject to me as a governor.

As the teaching of the Pharisees was a yoke too grievous to be borne, so the yoke of Christ is His teaching, His rule of life, and so is explained by the “learn of Me” that follows. (Compare Ecclesiasticus 51:26.)

The yoke is a figure taken from the use of oxen, and hence signifying to labor for one, or in the service of anyone.

It refers here to the religion of the Redeemer; and the idea is, that they should embrace His system of religion and obey Him.
All virtue and all religion imply “restraint” – the restraint of our bad passions and inclinations – and subjection to laws; and the Saviour here means to say that the restraints and laws of his religion are mild, and gentle, and easy.

Let anyone compare them
▪︎ with the burdensome and expensive ceremonies of the Jews (see Acts 15:10),
▪︎ with the religious rites of the pagan everywhere,
▪︎ or with the requirements of the Popish system,
And he will see how true it is that Jesus’ yoke is easy.

And let his laws and requirements be compared with the laws which sin imposes on its votaries – the laws of fashion, and honor, and sensuality – and he will feel that religion is “freedom” (John 8:36).

▪︎ “He is a freeman whom the truth makes free, and all are slaves besides.”
▪︎ It is “easier” to be a Christian than a sinner;
▪︎ and of all the yokes ever imposed on people, that of the Redeemer is the lightest.

The phrase “Take my yoke upon you” is Rabbinical.
The Jewish doctors often speak of:
▪︎ “the yoke of the kingdom of heaven”,
▪︎ of persons taking it upon them;
▪︎ and which they exhort to, and express in much such language as here; , “take upon you the yoke of the holy kingdom”, every day.

Their sense I take to be this, that a man must first make a profession of his faith in the God of Israel, and then live conformably to His law: agreeably to this, the Christ exhorts such persons who come to Him for rest and happiness,
▪︎ to profess their faith in Him,
▪︎ to embrace the doctrines of the Gospel,
▪︎ to submit to His ordinances,
▪︎ and to walk according to those laws, commands, and orders, which He, as king of saints, has made, and requires obedience to.

So those who come to Him for life, and believe in Him, as the Saviour of their souls, though they are not to trust in, and depend upon any duties performed by them; yet…
▪︎ they are not to sit still,
▪︎ lay aside the performance of good works,
▪︎ or live a licentious course of life,
but are always to be doing the will and work of their Lord.
And this he calls “His yoke”, in distinction from the yoke of the law of Moses, and of the traditions of the elders.

Learn of me; for I am meek and lowly in heart: and ye shall find rest unto your souls

As Christ’s willingness to empty Himself to the uttermost of His Father’s requirements was the spring of ineffable repose to His own Spirit, so in the same track does He invite all to follow Him, with the assurance of the same experience.

And learn of me, for I am meek, and lowly in heart

Respect seems to be had to Zechariah 9:9 where such characters as these are given of the Messiah.
The meekness, humility, and lowliness of Christ appear in his assumption of human nature;
▪︎ in his subjection to his Father;
▪︎ in the whole of his deportment and conversation among men;
▪︎ in his submission to the ordinance of baptism;
▪︎ in the whole course of his obedience to God,
▪︎ and in his sufferings and death;
and he is to be imitated herein, by all His followers, who may learn many excellent things from His example, as well as from His doctrine; and particularly, that whereas, though He was so great a person, yet condescended to perform every duty with readiness and cheerfulness, His disciples should not think it below them to conform to every ordinance of His, to every branch of His will; for He has set them an example, that they should tread in His steps, and walk even as He has walked.

There never was such an instance of humility, and lowliness of mind, as Christ; nor is there any example so worthy of our imitation as His.

Learn of me:
▪︎ Be my disciples;
▪︎ be taught by me, concerning all things pertaining to
▪︎ your acceptance with God,
▪︎ your duty,
▪︎ and your happiness:

I am meek and lowly in heart.

The stress lies upon the last words.
Others might be lowly with the lowliness which is ambition’s ladder, but pride and self-assertion were reigning in their hearts.

The Christ, in His infinite sympathy with men of all classes and conditions, could boldly incur the risk of seeming to boast of His humility, in order that He might win men to come and prove by experience that He was able and willing to give them rest, to hear the tale of their sorrows, and to turn from none with scorn.

This was eminently Christ’s personal character.
But this is not its meaning here.

He is giving a reason why they should embrace His religion.
That was, that He was not harsh, overbearing, and oppressive, like the Pharisees, but meek, mild, and gentle in his government.
His laws were reasonable and tender, and it would be easy to obey Him.

Meek toward all men, lowly toward God.

As an instructer, I will show myself to be most mild, gentle, and forbearing; kind and condescending toward all my disciples, directing them with tenderness, patience, and lenity, in the way to pardon, life, and salvation, not imposing on them any unnecessary burdens: and, as an example, recommending by my practice both meekness and humility;
▪︎ meekness by bearing all kinds of injuries,
▪︎ and humility by condescending to do the meanest good offices to the meanest of mankind.

Learn, then, of me to be meek and humble, both in disposition and behaviour;

Ye shall find rest unto your souls.

Here, as often elsewhere in our Lord’s teaching, we have a direct quotation from Jeremiah (Jeremiah 6:16).

That composure, tranquillity, and satisfaction which nothing but humility and meekness, with an entire subjection to me, can give.

The original words may be properly rendered, Ye shall find refreshment to your souls, such as you would in vain seek elsewhere; refreshment, arising from clear manifestations of the divine favour, consoling influences of his Spirit, lively hopes of his glory, and sensible communion with him.

The words “And ye shall find rest unto your souls” are referring to Jeremiah 6:16 which shows the rest he speaks of in the preceding verse, to be not a corporal, but a spiritual one; and which is to be enjoyed “in”, though not “for” the observance of Christ’s commands; whose “ways are ways of pleasantness, and all” whose “paths are peace”.

My ☆ μου (mou) ☆ Personal / Possessive Pronoun – Genitive 1st Person Singular ☆  I, the first-person pronoun. A primary pronoun of the first person I.

Yoke ☆ ζυγόν (zygon) ☆ Noun – Accusative Masculine Singular ☆  From the root of zeugnumi; a coupling, i.e. servitude; also the beam of the balance.

You ☆ ὑμᾶς (hymas) ☆ Personal / Possessive Pronoun – Accusative 2nd Person Plural ☆  You. The person pronoun of the second person singular; thou.

Learn ☆ μάθετε (mathete) ☆ Verb – Aorist Imperative Active – 2nd Person Plural ☆  Prolongation from a primary verb, another form of which, matheo, is used as an alternate in certain tenses; to learn.

Me ☆ ἐμοῦ (emou) ☆ Personal / Possessive Pronoun – Genitive 1st Person Singular ☆  I, the first-person pronoun. A primary pronoun of the first person I.

For ☆ ὅτι (hoti) ☆ Conjunction ☆  Neuter of hostis as conjunction; demonstrative, that; causative, because.

I am ☆ εἰμι (eimi) ☆ Verb – Present Indicative Active – 1st Person Singular ☆  I am, exist. The first person singular present indicative; a prolonged form of a primary and defective verb; I exist.

You will find ☆ εὑρήσετε (heurēsete) ☆ Verb – Future Indicative Active – 2nd Person Plural ☆  A prolonged form of a primary heuro, which heureo is used for it in all the tenses except the present and imperfect to find.

Your ☆ ὑμῶν (hymōn) ☆ Personal / Possessive Pronoun – Genitive 2nd Person Plural ☆  You. The person pronoun of the second person singular; thou. 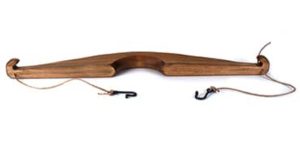 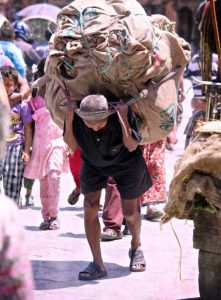