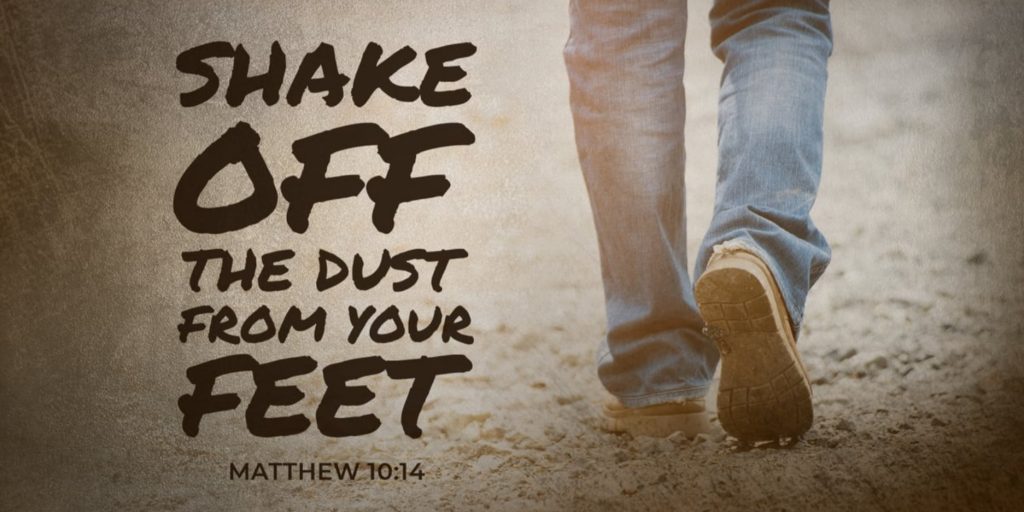 Matthew 10:14 KJV
And whosoever shall not receive you,
nor hear your words,
when ye depart out of that house or city,
shake off the dust of your feet.

New International Version
If anyone will not welcome you or listen to your words, leave that home or town and shake the dust off your feet.

New Living Translation
If any household or town refuses to welcome you or listen to your message, shake its dust from your feet as you leave.

English Standard Version
And if anyone will not receive you or listen to your words, shake off the dust from your feet when you leave that house or town.

Berean Study Bible
And if anyone will not welcome you or heed your words, shake the dust off your feet when you leave that home or town.

Berean Literal Bible
And whoever will not receive you nor will hear your words, shake off the dust of your feet going forth out of that house or that city!

New King James Version
And whoever will not receive you nor hear your words, when you depart from that house or city, shake off the dust from your feet.

New American Standard Bible
And whoever does not receive you nor listen to your words, as you leave that house or city, shake the dust off your feet.

Whosoever shall not receive you

That is, entertain you kindly; nor, in an obedient manner, listen to your words,

Shake off the dust of your feet

shake off the dust of your feet. Mark and Luke add to these words “for a testimony against them,” (Mr 6:11; Lu 10:11).
By this symbolical action they vividly shook themselves from all connection with such, and all responsibility for the guilt of rejecting them and their message.

Such symbolical actions were common in ancient times, even among others than the Jews, as strikingly appears in Pilate (Matthew 27:24). And even to this day it prevails in the East.

The act was a familiar symbol of the sense of indignation, as in the case of Paul (Acts 13:51) at Antioch in Pisidia.

The Jewish maxim, that even the very dust of a heathen land brought defilement with it, added to its significance.

It was a protest in act, declaring (as our Lord declares in words) that the city or house which did not receive the messengers of the Christ was below the level even of the Gentiles.

The Jews thought the land of Israel so peculiarly holy, that when they came home from any heathen country they stopped at the borders, and shook or wiped off the dust of it from their feet, that the holy land might not be polluted with it.

Therefore the action here enjoined was a lively intimation, that those Jews who had rejected the gospel were no longer holy, but were on a level with heathen and idolaters.

To shake off the dust from the feet, therefore, was a significant act, denoting that they regarded them as impure, profane, and paganish, and that they declined any further connection with them. It is recorded that this was actually done by some of the apostles (See Acts 13:51;  18:6).

In the following words it becomes clear that indeed you have reason to shake off the dust of your feet in such a case, for whatever profession such Jews may make of their regard to the true God, and however they may continue to boast of their national privileges, their punishment at the day of final judgment shall not only be greater than that of the generality of Gentile sinners, but even than that of those monsters of unnatural wickedness who formerly inhabited Sodom and Gomorrah, and were consumed with fire and brimstone from heaven.

For the people of those cities never sinned against such extraordinary light and such singular favours as they will do who reject the gospel now to be preached to them, with great plainness and power, by you.

The symbolic act indicated that the apostles and their Lord regarded them not only as unclean, but as entirely responsible for their uncleanness (See Acts 18:6).

What will the judgment be? 2/2

What will the judgment be? 2/2

What will the judgment be? 1/2 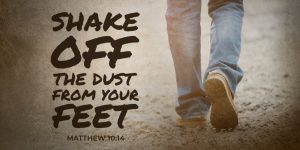