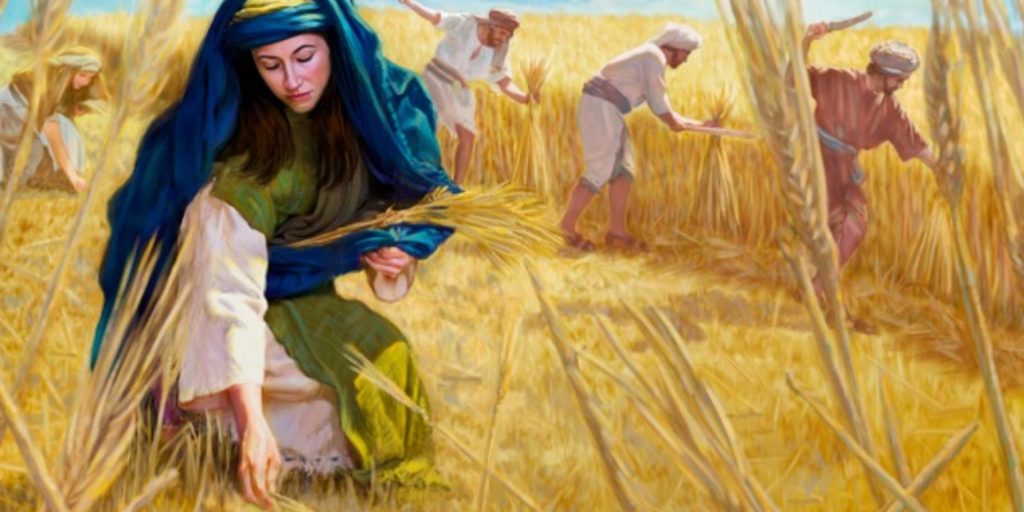 Ruth 01:22
So Naomi returned, and Ruth the Moabitess, her daughter in law, with her, which returned out of the country of Moab: and they came to Bethlehem in the beginning of barley harvest.

Berean Study Bible
So Naomi returned from the land of Moab with her daughter-in-law Ruth the Moabitess. And they arrived in Bethlehem at the beginning of the barley harvest.

New King James Version
So Naomi returned, and Ruth the Moabitess her daughter-in-law with her, who returned from the country of Moab. Now they came to Bethlehem at the beginning of barley harvest.

New American Standard Bible
So Naomi returned, and with her Ruth the Moabitess, her daughter-in-law, who returned from the land of Moab. And they came to Bethlehem at the beginning of barley harvest.

Aben, Ezra thinks this is to be understood of her returning at another time; but it is only an observation of the writer of this history, to excite the attention of the reader to this remarkable event, and particularly to what follows.

The narrator pauses to recapitulate his narrative of the return, and hence the recapitulatory so is, in English, very much to be preferred to the merely additive ‘and’ of the original.

Which returned out of the country of Moab

A superfluous expression after Naomi returned, and possibly an insertion from Ruth 2:6, unless we regard it as a standing description of Ruth.

And Ruth the Moabitess, her daughter-in-law, with her, who returned out of the land of Moab.

The cumulative and apparently redundant expression, “who returned out of the land of Moab,” is remarkable, at once for its simplicity and for its inexactitude.
Ruth, strictly speaking, had not returned, but she took part in’ Naomi’s return.

And Ruth the Moabitess, her daughter in law, with her

And they came to Bethlehem in the beginning of barley harvest

The barley harvest began on the second day of the feast of unleavened bread, on the “sixteenth” of Nisan, which is during our March, and part of April, when they offered the sheaf of the firstfruits to the Lord, and then, and not till then, might they begin their harvest; see Leviticus 23:10, 14.

Hence the Targum here is, “they came to Bethlehem at the beginning of the day of the passover, and on that day the children of Israel began to reap the wave sheaf, which was of barley.”

So the Egyptians and Phoenicians, near neighbours of the Jews, went about cutting down their barley as soon as the cuckoo was heard, which was the same time of the year.
Hence the comedian (Aristoph. in Avibus, p. 565) calls that bird the king of Egypt and Phoenicia.

Barley ripened before wheat, and began to be reaped sometimes as early as March, but generally in April, or Abib.
By the time that the barley-harvest was finished the wheat crop would be ready for the sickle.

In the beginning of barley harvest

God had restored plenty to His people, and the wayfarers thus arrive to witness and receive their share of the blessing.
The barley harvest was the earliest (Exodus 9:31-32), and would ordinarily fall about the end of March or April.

At the beginning of the barley harvest.

It’s just at the end of the first chapter.
It doesn’t seem like a very important announcement.

Naomi returns to Israel after more than ten years ‘at the time of the barley harvest’.
And elsewhere in the Bible it says, “Do not despise the day of small things” (Zechariah 4:10).

What drove her away from Bethlehem over ten years ago?
The empty land, no harvest for years.

And what’s the first thing she sees now?
The full land, there is harvest again! A promise…

She herself feels ’empty’, but the fields are ‘full’!

No, she doesn’t get her husband and her sons back with that.
However, there will soon be a new life for her on the full field.

Anyone who is depressed, feels empty, may also pray today for open eyes, open ears and an open heart.
The Lord our God wants to encourage us precisely through ‘little things’, so that we continue to expect great things from Him. Whether you’re a Naomi (“my delight”) or a Mara (“bitterness”) right now.