Mark 08:22 (AV)
And He cometh to Bethsaida;
and they bring a blind man unto Him,
and besought Him to touch him.

He cometh to Bethsaida.
Bethsaida Julias, on the northeast side of the lake.
From here He proceeded to Cæsarea Philippi ( Mark 8:27 ).
Bethsaida was near the mouth of the upper Jordan into the lake. It was upon the eastern bank of the river.
The account of the miracle that follows is only given by Mark.

And they bring a blind man unto him.
The people, maybe friends, maybe neighbors, but probably not the disciples, brought him.
▪︎ Maybe he was brought because he could not find the way alone (as he was blind),
▪︎ Or maybe because he had not the faith that would induce him to go, and so was brought by the faith of his friends.

This man was probably not born blind.
As he had evidently seen men and trees before (Mark 8:24).

They brought a blind man to Him and begged Him to touch him. (Mark 8:22)
We do not know whether it were friends or acquaintances who brought the blind man to the Lord Jesus. And while there is speculation about this, it really doesn’t matter. Marcus also saw no reason to elaborate on this.
What is certain is that these people have known,
▪︎ that Jesus was in their town
▪︎ and that Jesus could heal the blind.
And so they brought him to Jesus.

No one could help the man, but Jesus could.
This becomes clear to us in this Bible passage.

As those people did then, so should we do as well.
Bringing the blind, the spiritually blind to the Lord Jesus.

When we ourselves have been made seeing by Jesus and have received in Him everything that serves for our eternal peace, it is a work of gratitude to point out the Savior in word and deed to those who are still blind.

And let us not forget to pray.
He who is delivered from the utmost evil will ask the Lord to be worthy of bringing others to Jesus, that he may work a great miracle on them also. If the Lord has been able to redeem us, He can do the same for others.
He gives the blind the light in the eyes and in the heart. 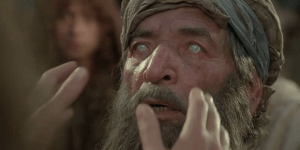