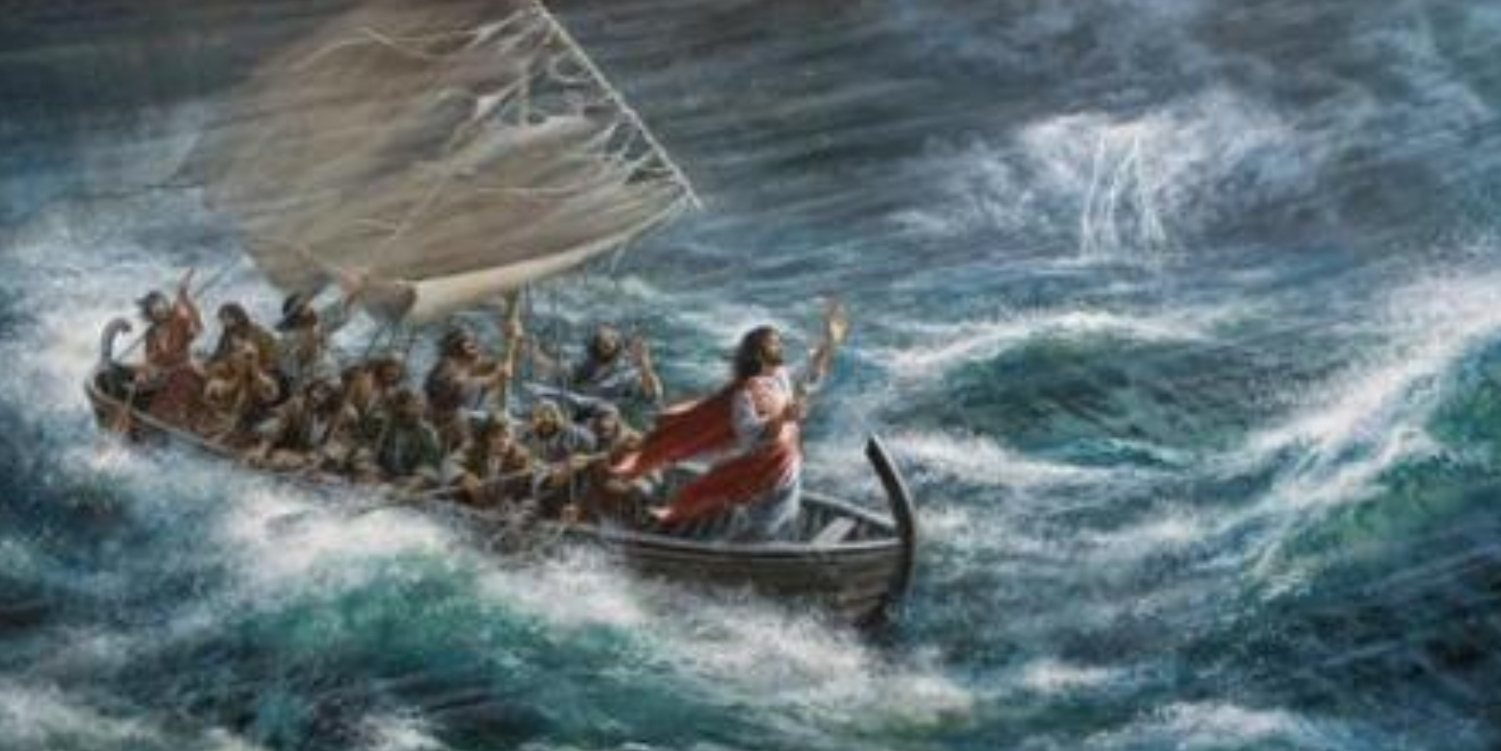 Mark 4:41
And they feared¹ exceedingly²,
and said one to another³,
What manner of man is this,
that even the wind⁴ and the sea obey him⁵?‭

¹) To scare away, to be afraid of one.
²) Feared exceedingly: Stricken by terror.
³) Said to each other; Said to themselves.
⁴) A very strong tempestuous wind‭.
⁵) Submit to Him.

They feared exceedingly
They were struck with deep awe.

It seems they were now more afraid of the power that Jesus demonstrated by stopping the storm and the raging of the sea, than they had been for the storm.

The disciples in the boat saw it with their own eyes.
The astounding display of power, the control of the storm in which men are as helpless as infants, filled them with awe. What manner of being could he be whom storm, wind, and sea obeyed? They had not yet learned that the word which the sea obeyed, was the obedience to the word by which the world itself was made.

Now their fear was rectified by their faith.
When they feared the winds and the seas, it was for want of the reverence they ought to have had for Christ. But now that they saw a demonstration of His power over them, they feared them less, and Him more.

They feared lest they had offended Christ by their unbelieving fears; and therefore studied now to give him honour.
▪︎ They had feared the power of the storm, and that fear had torment and amazement in it;
▪︎ But now they feared the power and grace of the Redeemer in the calm; they feared the Lord and His goodness, and it had pleasure and satisfaction in it,
And by it they gave glory to Christ, as Jonah’s mariners, who, when the sea ceased from her raging, feared the Lord exceedingly, and offered a sacrifice unto the Lord (Jonah 1:16).
This sacrifice they offered to the honour of Christ; they said, What manner of man is this? Surely more than a man, for even the winds and the seas obey him.

What manner of man is this
“What is this?” Israel has all along been singing of their God
“Thou rulest the raging of the sea: when the waves thereof arise, Thou stillest them!”
“The Lord on high is mightier than the noise of many waters, yea, than the mighty waves of the sea!” ( Psalms 89:9, 93:4 ).

But, see now, in this very boat of ours is One of our own flesh and blood, who with His word of command hath done the same!

Exhausted with the fatigues of the day, He was but a moment ago in a deep sleep, undisturbed by the howling tempest, and we had to waken Him with the cry of our terror; but rising at our call, His majesty was felt by the raging elements, for they were instantly hushed–“WHAT MANNER OF MAN IS THIS?”

Examples of power over elements:

The disciples go through troubled moments.

They have been hit by a storm that makes the Sea of ​​Galilee notorious.
There is a danger of perishing with all hands.
And Jesus is sleeping.

Does He not care about their fate?
Yet, although the howling of the storm and the roaring of the sea did not wake Him up, the cries of His disciples do.

With royal authority, Jesus silences the storm. Apparently the disciples did not expect that, when their terror gives way to fear: Who is this, Who have we on board?; even the wind and the sea obey Him.

Is it ever storming in your soul, so badly that you are afraid of perishing?
And it looks like Jesus is sleeping?
When you call on Him in your trouble, He makes it quiet.

Or do you not have faith?