Leviticus 16:22 (AV)
And the goat¹ shall bear² upon him
all their iniquities³
unto a land⁴ not inhabited⁵:
and he shall let go the goat
in the wilderness.‭

In the old covenant we find numerous images and shadows that point to the Christ.

One of these is the scapegoat.
The high priest laid his hands on the goat, to confess therewith the sins of the people, and to give it to him by the laying on of hands.
There is a rich symbolic idea in this.

● That animal in itself was innocent, yet all the guilt of the people was laid upon it.
○ Thus we see in the fulfillment of this image, the perfectly innocent Jesus, about which the earthly judge has said five times: I find no fault in this man. Yet a little later expelled as charged with the guilt of all His own, and reckoned as a criminal on the cross of Golgotha.

● The goat was sent into the desert into solitude.
○ In this way Christ also ended up in great solitude in His suffering. All His own have forsaken Him, we read. And on the cross He cries out that His Father also left him.

Receiving support from no one, He made His perfect sacrifice.
▪︎ He was forsaken, that we would never be forsaken from God.
▪︎ He was in solitude, that we might have communion with the Father forever. 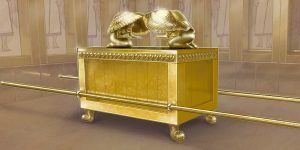