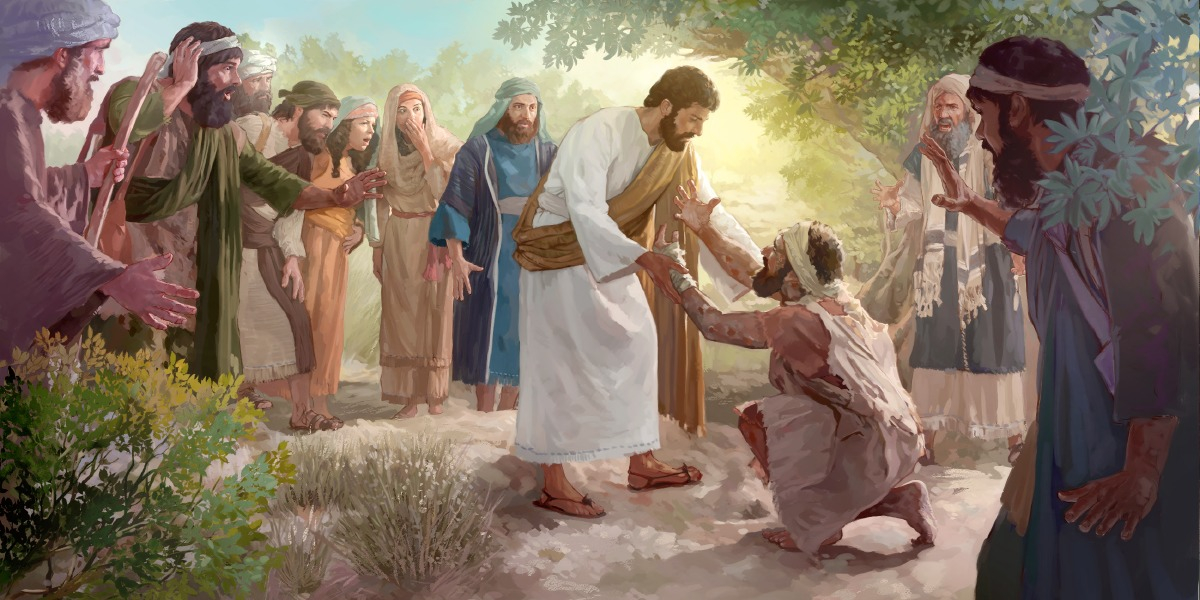 Mark 1:40-45
⁴⁰And a leper came to Jesus, beseeching Him and falling on his knees before Him, and saying, “If You are willing, You can make me clean.”
⁴¹Moved with compassion, Jesus stretched out His hand and touched him, and said to him, “I am willing; be cleansed.”
⁴²Immediately the leprosy left him and he was cleansed.
⁴³And He sternly warned him and immediately sent him away, ⁴⁴and He said to him, “See that you say nothing to anyone; but go, show yourself to the priest and offer for your cleansing what Moses commanded, as a testimony to them.”
⁴⁵But he went out and began to proclaim it freely and to spread the news around, to such an extent that Jesus could no longer publicly enter a city, but stayed out in unpopulated areas; and they were coming to Him from everywhere.

Jesus brings an outcast back into community after healing.

Much can be learned from Jesus’ encounters with the misery here on earth. As if attracted by a magnet, all possible human distress gathers around Him.

Now watch His attitude. He does not just let it be. He does not despair. Nor does He turn away with disgust. He does not put people off with cheap words. None of that.
He’s doing something about it! He heals many people who were in bad shape in their body, but also in their spirit. He does what He can, and gives Himself completely (Compare John 10:10).
Prayer to his Father in heaven is his source of strength in this (Compare Mark 1:35).

What’s behind it?
His divine love, His mercy, His deep compassion for our fate (Compare Isaiah 63:9; Psalm 91:15; Hebrews 4:15). Jesus feels sorry for this leper. The man shows great reverence for Jesus in his supplication (Mark 1:40). Jesus is affected. Leprosy was a terrible, incurable disease, a slow fading away of the person.

Actually, a leper was already dead during his life.
He looked hideous. Being unclean, he was not allowed to interact with healthy people, which made him very lonely (Leviticus 13:45,46). But Jesus contacts and touches the man.
He is not afraid of uncleanness, He does not avoid it.
▪︎ He wants recovery. Being able to, or not being able to do so, is not an issue.
▪︎ He wants the outcast to be taken back into the community (Mark 1:41,42)!
▪︎ He also wants the official authorities to recognize His power (Mark 1:43,44).
▪︎ He does not disregard legal regulations (Leviticus 14: 1-31).

After his healing, the man is not allowed to publicly advertise Jesus (Mark 1:44). Jesus is not interested in superficial popularity as a miracle doctor. He must not be disregarded in his proper intentions, and it must not be made impossible for him to perform in public.

The Messiah was expected as King to deliver the people with the sword from the Romans, their enemies (Cf. John 6:14,15). But Jesus is the Messiah who redeems us through His suffering and death.

Ask yourself:
▪︎ Is compassion really the central reason of my help towards others, or am I doing it because I am eager for my own honor?
▪︎ Do I help others because it benefits them, or do I help because it benefits me in any way? Or maybe I am not helping because it is of no benefit to me?

▪︎ Ask the Lord to give you too His deep and clean motivation to help others.