Matthew 18:11 KJV
For the Son of man is come to save that which was lost.

The New American Standard Bible puts this verse between brackets and has a footnote saying: “Early manuscripts do not contain this verse”

The Revised Version omits this verse completely, and puts in a footnote: “Many authorities, some ancient, insert verse 11” followed by the text of the verse.

The reason for putting the verse between brackets, or omitting it, is found in the fact that early manuscripts do not contain this verse. It is also lacking in some old Italic, Syriac, Coptic and Georgian manuscripts, and such ancient sources as the Apostolic Canons, Eusebius, Jerome, and others.

But it is found in some other sources, not quite so ancient, such as the Latin Vulgate.

It is not found in any manuscript before the 5th century.

According to Bruce Metzger, “There can be little doubt that the words … are spurious here, being omitted by the earliest witnesses representing several textual types… [This verse was] manifestly borrowed by copyists from Luke 19:10.” 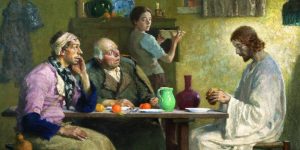