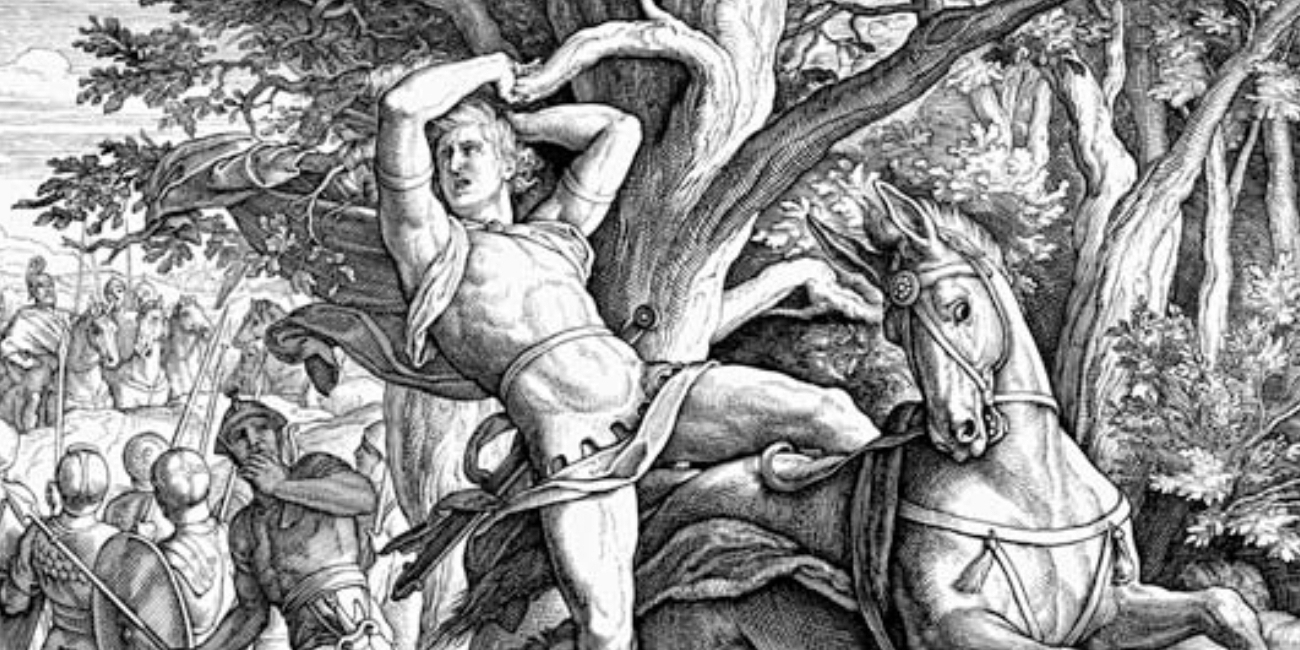 He was noted for his personal beauty and for the extra-ordinary profusion of the hair of his head ( 2 Samuel 14:25, 26 ). The first public act of his life was the blood-revenge he executed against Amnon, David’s eldest son, who had basely wronged Absalom’s sister Tamar.
This revenge was executed at the time of the festivities connected with a great sheep-shearing at Baal-hazor.

David’s other sons fled from the place in horror, and brought the tidings of the death of Amnon to Jerusalem. Alarmed for the consequences of the act, Absalom fled to his grandfather at Geshur, and there abode for three years ( 2 Samuel 3:3, 13:23-38). David mourned his absent son.

As the result of a stratagem carried out by a woman of Tekoah, Joab received David’s sanction to invite Absalom back to Jerusalem. He returned accordingly, but two years elapsed before his father admitted him into his presence ( 2 Samuel 14:28 ).

Absalom was now probably the oldest surviving son of David, and as he was of royal descent by his mother as well as by his father, so he began to aspire to the throne.
His pretensions were favoured by the people. By many arts he gained their affection; and after his return from Geshur ( 2 Samuel 15:7 ) he went up to Hebron, the old capital of Judah, along with a great body of the people, and there proclaimed himself king.

The revolt was so successful that David found it necessary to quit Jerusalem and flee to Mahanaim, beyond the Jordan; where upon Absalom returned to Jerusalem and took possession of the throne without opposition.

Ahithophel, who had been David’s chief counsellor, deserted him and joined Absalom, whose chief counsellor he now became.
Hushai also joined Absalom, but only for the purpose of trying to counteract the counsels of Ahithophel, and so to advantage David’s cause. He was so far successful that by his advice, which was preferred to that of Ahithophel, Absalom delayed to march an army against his father, who thus gained time to prepare for the defence.

Absalom at length marched out against his father, whose army was under the command of Joab, he encountered on the borders of the forest of Ephraim. Twenty thousand of Absalom’s army were slain in that fatal battle, and the rest fled.

Absalom fled on a swift mule; but his long flowing hair, was caught in the bough of an oak, and there he was left suspended till Joab came up and pierced him through with three darts.

His body was then taken down and cast into a pit dug in the forest, and a heap of stones was raised over his grave. When the tidings of the result of that battle were brought to David, as he sat impatiently at the gate of Mahanaim, and he was told that Absalom had been slain, he gave way to the bitter lamentation: “O my son Absalom, my son, my son Absalom! would God I had died for thee, O Absalom, my son, my son!” ( 2 Samuel 18:33. Compare Exodus 32:32 ; Romans 9:3 ). 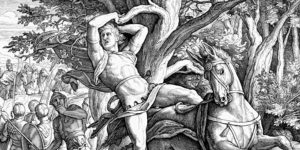