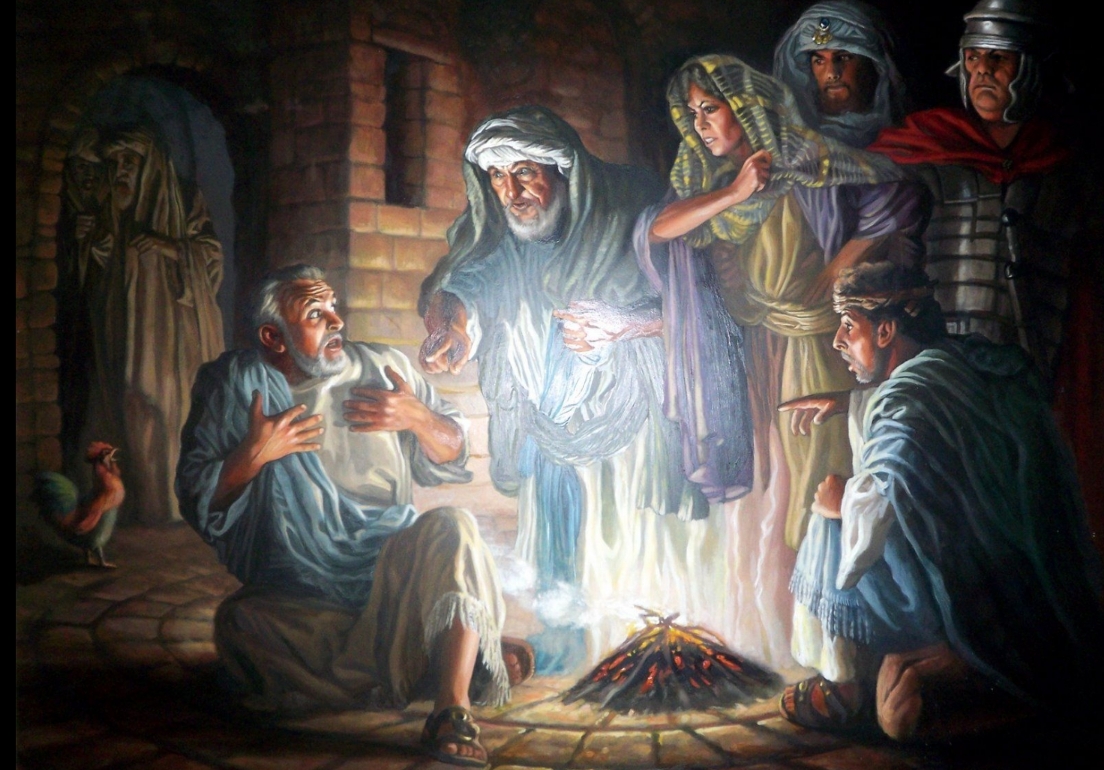 Mark 14:54 (NASB)
Peter had followed Him at a distance,
right into the courtyard of the high priest;
and he was sitting with the officers
and [was] warming himself at the fire.

Our Lord was within, in a large room, being arraigned before the council. John informs us (in John 18:15) that he himself, being known to the high priest, had gone in with Jesus into the court of the high priest; and that he had been the means of bringing in Peter, who had been standing outside at the door leading into the court.

We now see Peter among the servants (a better translation is officers), crouching over the fire. The weather was cold, for it was early springtime; and it was now after midnight. Peter was warming himself in the light of the fire (πρὸς τὸ φῶς), and so his features were clearly seen in the glow of the brightly burning charcoal.

We are here present at the Christ’s condemnation before the great council of the Jews. Peter followed. But …
▪︎ note that the high priest’s fire-side was no proper place for him,
▪︎ note that those servants (officers) were not the proper company, for him either.
Peter was here at an entrance into temptation.

Into the courtyard of the high priest

“An oriental house,” says Robinson, “is usually built around a quadrangular interior court; into which there is a passage (sometimes arched) through the front part of the house, closed next the street by a heavy folding gate, with a smaller wicket for single persons, kept by a porter.

The interior court, often paved or flagged, and open to the sky, is the hall, which our translators have rendered ‘courtyard’, where the attendants made a fire; and the passage beneath the front of the house, from the street to this court, is the porch.

The place where Jesus stood before the high priest may have been an open room, or place of audience on the ground floor, in the rear or on one side of the court; such rooms, open in front, were customary.

It was close upon the court, for Jesus heard all that was going on around the fire, and turned and looked upon Peter (Luke 22:61).”

And he sat with the servants, and warmed himself at the fire

The graphic details, here omitted, are supplied in the other Gospels. John 18:18:
And the servants and officers stood there; that is, in the hall, within the quadrangle, open to the sky.

Who had made a fire of coals

Or charcoal (in a brazier probably).

For it was cold.

John alone of all the Evangelists mentions the material, and the coldness of the night, as Webster and Wilkinson remark. The elevated situation of Jerusalem, observes Tholuck, renders it so cold about Easter as to make a watch fire at night indispensable.

And Peter stood with them and warmed himself

He went in,” says Matthew (Matthew 26:58), “and sat with the servants to see the end.” These two minute statements throw an interesting light on each other. His wishing to “see the end,” or issue of these proceedings, was what led him into the courtyard, for he evidently feared the worst.

But once in, the serpent coil is drawn closer; it is a cold night, and why should not he take advantage of the fire as well as others?
Besides, in the talk of the crowd about the all-engrossing topic he may pick up something which he would like to hear.

Poor Peter! But now, let us leave him warming himself at the fire, and listening to the hum of talk about this strange case by which the subordinate officials, passing to and fro and crowding around the fire in this open court.

Peter was with the attendants, where he better would not have been.
Often a fall is incurred more easily in the presence of such as servants, who are less feared, than among their masters.

Peter was warming himself.
Often under care for the body the soul is neglected.

φῶς, the light
Appropriately light is the expression used instead of fire: Peter was recognised by the light, when under other circumstances he might have been safer (comp. Mark 14:67).

To follow the Lord is a good thing, even a necessary thing.
He who follows Me will not walk in darkness, but will have the light of life.
And to Levi it ​​sounded: Follow Me.

Peter followed the Lord Jesus from afar, reluctantly, you might think. At a great distance, indeed, but Simon Peter followed after all.

Yet Peter is wrong. Jesus cannot be followed here.
Peter followed to see what was happening, and to see if there might be an opportunity to help the Lord.

Despite the warning: Simon Simon, Satan has desired to sift you like wheat, Peter follows the Lord Jesus on this perilous route.

Christ walks this way in all solitude.
Here no disciple can and should follow Him.
We cannot and must not contribute to our salvation. Jesus is the complete Savior, besides Whom there is no salvation to be sought or found.

Yet Peter is near Jesus in his fall.
Jesus watches over him. Otherwise, Peter would have been finished here forever. 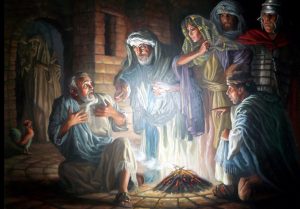