Matthew 9:18
While he spake these things unto them,
behold, there came a certain ruler,
and worshipped him, saying,
My daughter is even now dead:
but come and lay thy hand upon her,
and she shall live.

New International Version
While he was saying this, a synagogue leader came and knelt before him and said, “My daughter has just died. But come and put your hand on her, and she will live.”

New Living Translation
As Jesus was saying this, the leader of a synagogue came and knelt before him. “My daughter has just died,” he said, “but you can bring her back to life again if you just come and lay your hand on her.”

English Standard Version
While he was saying these things to them, behold, a ruler came in and knelt before him, saying, “My daughter has just died, but come and lay your hand on her, and she will live.”

Berean Study Bible
While Jesus was saying these things, a synagogue leader came and knelt before Him. “My daughter has just died,” he said. “But come and place Your hand on her, and she will live.”

Berean Literal Bible
Of Him speaking these things to them, behold, a certain ruler having come, was kneeling down to Him, saying, “My daughter presently has died; but having come, lay Your hand upon her, and she will live.”

New King James Version
While He spoke these things to them, behold, a ruler came and worshiped Him, saying, “My daughter has just died, but come and lay Your hand on her and she will live.”

New American Standard Bible
While He was saying these things to them, behold, a synagogue official came and bowed down before Him, and said, “My daughter has just died; but come and lay Your hand on her, and she will become alive again.”

While he spake these things [in Matthew’s house], behold, there came a certain ruler

The sequence seems so clear as, at first, hardly to admit of doubt; and yet it is no less clear that Mark and Luke represent what is told as following close upon our Lord’s return to the western side of the lake after the healing of the Gadarene, and place many events between it and the call of Levi.

Assuming Matthew’s own connection with the Gospel, we may justly, in this case, give greater weight to his order than to the arrangement of the other two, who derived the account from others.

While — αὐτοῦ (autou) — Personal / Possessive Pronoun – Genitive Masculine 3rd Person Singular — He, she, it, they, them, same. From the particle au; the reflexive pronoun self, used of the third person, and of the other persons.
[Jesus] was saying — λαλοῦντος (lalountos) — Verb – Present Participle Active – Genitive Masculine Singular — A prolonged form of an otherwise obsolete verb; to talk, i.e. Utter words.

Things concerning, and in vindication of His, and His disciples, eating and drinking with publicans and sinners, and their not fasting as others did; and while He spake these parables, to expose the folly of self-righteous persons, and justify His own conduct, in calling sinners to repentance

These things — Ταῦτα (Tauta) — Demonstrative Pronoun – Accusative Neuter Plural — This; he, she, it.

That is to the Scribes and Pharisees, and to John’s disciples

The fact is interesting as suggesting a coincidence between this narrative and that of the centurion’s servant.

As a ruler of the synagogue, Jairus would probably have been among the elders of the Jews who came as a deputation to our Lord, and would thus have been impressed with His power to heal in cases which seemed hopeless.

As this is one mistake, so it is another to say, that Dr. Lightfoot speaks of this ruler, as the same with the “minister” of the congregation; when both here, and in the place referred to, he manifestly distinguishes them; as do the Jews: for, by this ruler, as their commentators (Jarchi & Bartenora in Misn. Yoma, c. 7. sect. 1. & Sota, c. 7. sect. 7.) say, “the necessary affairs of the synagogue were determined, as who should dismiss with a prophet, who should divide the “shema”, and who should go before the ark.”

The doctor makes indeed , “the messenger of the congregation”, to be the same with “the minister of the synagogue”, and which is his mistake; for these were two different officers (Vid. Rhenfurd, dissert. 1. p. 81, etc.): the former was the lecturer, or preacher; and the latter, a sort of a sexton to keep the synagogue clean, open and shut the doors, and do other things before mentioned.

The rulers, in general, were Christ’s bitterest enemies; yet there were some of them of a different character (John 12:42).
In particular, this ruler must have had a very favourable opinion of Jesus, and indeed great faith in His power, else he would not have applied to Him for help in the present extremity, nor have done Him so much honour as to worship, or fall down before him.

This Jairus was a man of great power and significance; who in such a very humble manner prostrated himself at the feet of Jesus, and expressed such strong faith in Him

That is, fell down before him, or expressed his respect for him by a token of profound regard.

[and] knelt — προσεκύνει (prosekynei) — Verb – Imperfect Indicative Active – 3rd Person Singular — From pros and a probable derivative of kuon; to fawn or crouch to, i.e. prostrate oneself in homage.
Before Him — αὐτῷ (autō) — Personal / Possessive Pronoun – Dative Masculine 3rd Person Singular — He, she, it, they, them, same. From the particle au; the reflexive pronoun self, used of the third person, and of the other persons.

My daughter is even now dead.

Luke adds, as one who had inquired into details, that she was the ruler’s only daughter, that she was twelve years old, and that she “lay a dying,” agreeing with Mark’s “is at the point of death,” literally, in extremis, “at the last gasp;” and both add that the crowd that followed “thronged” and “pressed” our Lord as He went.

Mark calls her his “little daughter”, she was about “twelve” years of age, and that with strict propriety, according to the Jewish canons, which (Maimon. Hilchot lshot, c. 2. sect. 1. & Bartenora in Misn. Nidda, c. 5. sect. 6.) say; that “a daughter, from the day of her birth until she is twelve years complete, is called “a little one” and when she is twelve years of age, and one day and upwards, she is called “a young woman”.”

Mark and Luke say and that information of her actual death was brought to him by one who was sent by the ruler of the synagogue, while Jesus was going.

Matthew combined the two facts, and stated the representation which was made to Jesus, without stopping particularly to exhibit the manner in which it was done.

In a summary way he says that the ruler communicated the information.
Luke and Mark, dwelling more particularly on the circumstances, state at length the way in which it was done; that is, by himself stating, in a hurry, that she was “about to die,” or “was dying,” and then in a few moments sending word that “she was dead.”

The Greek word, rendered “is even now dead,” does not of necessity mean, as our translation would express, that she had actually expired, but only that she was “dying” or about to die (Compare Genesis 48:21).

It is likely that a father, in these circumstances, would use a word as nearly expressing actual death as would be consistent with the fact that she was alive. The passage may be expressed thus: “My daughter was so sick that she must be by this time dead.”

The ruler’s address to Christ on this occasion, is a very considerable, though not so great an instance of faith as some others; that he, who was a ruler of a synagogue, should apply to Christ, which sort of men were generally most averse to Him; that he should fall down and worship Him, if not as God, since as yet he might be ignorant of His deity, yet behaved with the profoundest respect to Him, as a great man, and a prophet; that he should come to Him when his child was past all hope of recovery.

When he had reason to believe she was actually dead, as she was; that even then, he should believe in hope against hope.
He affirms, that he really believed, that if Christ would but come to his house, and lay his hand upon her, an action often used in grave and serious matters, as in blessing persons, in prayer, and in healing diseases, she would certainly be restored to life again.

But come and lay thy hand upon her, and she shall live

It was customary for the Jewish prophets, in conferring favors, to lay their hand on the person benefited. Jesus had probably done so also, and the ruler had probably witnessed the fact.
So his faith was probably built on the miracles which he knew Jesus had performed, for our Lord had by this time resided in Capernaum several months.

But — ἀλλὰ (alla) — Conjunction — But, except, however. Neuter plural of allos; properly, other things, i.e. contrariwise.
Come — ἐλθὼν (elthōn) — Verb – Aorist Participle Active – Nominative Masculine Singular — To come, go.
[and] place — ἐπίθες (epithes) — Verb – Aorist Imperative Active – 2nd Person Singular — To put, place upon, lay on; I add, give in addition. From epi and tithemi; to impose.
Your — σου (sou) — Personal / Possessive Pronoun – Genitive 2nd Person Singular — You. The person pronoun of the second person singular; thou.
Hand — χεῖρά (cheira) — Noun – Accusative Feminine Singular — A hand.
On — ἐπ’ (ep’) — Preposition — On, to, against, on the basis of, at.
Her — αὐτήν (autēn) — Personal / Possessive Pronoun – Accusative Feminine 3rd Person Singular — He, she, it, they, them, same. From the particle au; the reflexive pronoun self, used of the third person, and of the other persons.
And — καὶ (kai) — Conjunction — And, even, also, namely.
She will live — ζήσεται (zēsetai) — Verb – Future Indicative Middle – 3rd Person Singular — To live, be alive. A primary verb; to live

The sun can send some of its light and heat through very murky skies, and the Sun of Righteousness can do the same, and even more.

There may be much earthly rubbish in the soul that comes to Christ; but if there is one grain of faith, Christ will receive that soul with all its rubbish; for He knows well

Lay your hand on her, and she shall live.

The greater the need, the more glorious the redemption.
Jairus’ daughter was dying when her father went to the Savior. Christ was held up by the crowd and by the woman with an issue of blood. Then someone from Jairus’ house came to say that his daughter had died.

Jairus was allowed to think big of the Lord.
Christ can heal a dying person, but He can also restore from the dead.

Every human being is naturally dead in sins and trespasses.

Jairus has experienced with his daughter that the Prince of Life is stronger than death.
At his prayer the Lord performed an unspeakably great miracle.

The Lord elicited prayer from the heart for the erring posterity.
He works miracles on the cry of distress.
He makes spiritual death alive spiritually, to the glory of His Name. 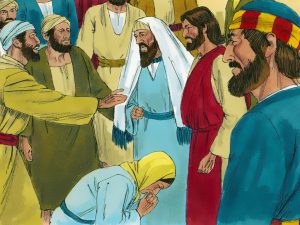