Matthew 9:18-26
¹⁸While He was saying these things to them, a synagogue official came and bowed down before Him, and said, “My daughter has just died; but come and lay Your hand on her, and she will live.”
¹⁹Jesus got up and began to follow him, and so did His disciples.
²⁰And a woman who had been suffering from a hemorrhage for twelve years, came up behind Him and touched the fringe of His cloak; ²¹for she was saying to herself, “If I only touch His garment, I will get well.” ²²But Jesus turning and seeing her said, “Daughter, take courage; your faith has made you well.” At once the woman was made well.
²³When Jesus came into the official’s house, and saw the flute-players and the crowd in noisy disorder, ²⁴He said, “Leave; for the girl has not died, but is asleep.” And they began laughing at Him. ²⁵But when the crowd had been sent out, He entered and took her by the hand, and the girl got up.
²⁶This news spread throughout all that land.

A highly placed man also seeks refuge in Jesus, with the need in his family: a dying daughter. He is an example of unwavering faith. He is also not deterred by the trial of Jesus’ unexpected delay.
Even if death has already come and everyone thinks, “It’s too late now,” he insists (Mark 5:35). “Faith can never expect too much.” Jesus deserves our unlimited trust!

The sick woman is an example of faith that dares to dare and not be rejected. She has much to overcome, for she suffered from a very nasty ailment, which made her tired, unclean (Leviticus 15:25) and repulsive.

She had already sought healing everywhere, but found no benefit from anyone. It was a real agony (Mark 5:25,26). She lived in secret, which made her very lonely and made her feel inferior.

She doesn’t dare to admit it out of shame, she wants to remain unknown and hides in the crowd. Yet her faith conquers her fear, she considers a touch of Jesus’ garment sufficient to be healed (Matthew 9:20,21).

That is faith: putting everything aside, being sure against everything that Jesus can provide a solution, even in the most hopeless situation.

Yet everything can still revolve around ourselves.
We should not be concerned with getting the power of Jesus (cf. Mark 5:30). No, it must be our concern for Himself. Just as this woman also had to meet the Lord Jesus personally and hear his word (Matthew 9:22).

For Jesus, death is not the absolute end, for Him it is not too late.

We tend to see no further than the harsh reality and resign ourselves to it. Jesus prophetically calls death a sleep (Matthew 9:23,24; Cf. Deuteronomy 31:16; Daniel 12:2).

The miracle of the raising of the daughter of Jairus is a climax in the series of miracles that Matthew has mentioned so far, the highest revelation of Jesus’ power: the victory also of the worst consequence of sin: death (Romans 6:23).

The Christ, through His atoning death, conquered death forever (Romans 8:37-39).

This message must be spread worldwide.
Also by us in our environment.
That’s where people come to (Matthew 9:26). 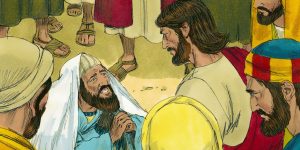