The kingdom of heaven corresponds to… yes to what?
You tend to only look at the next word. But a whole parable follows, and the parable as a whole is meant to show something of the Kingdom of Heaven.

There is one who sows good seed.
But his enemy sows weeds in the night.
It is a special kind of weed, the dolik, which looks a lot like grain and is therefore very difficult to distinguish from real grain, especially at the beginning of growth.

Wherever Christ works, he tries to destroy.
He works cunningly.
Where good seed is sown, he sows his seed like it. There is no difference in the beginning. Only later does it become clear what is real grain and what is weeds.

Although the seed of the devil grows very luxuriantly in the world, the Lord Jesus does not want to intervene prematurely. He is extremely careful. The farmer’s servants are not yet allowed to remove the weeds. Imagine making an error of judgment! Rather, He waits for the harvest. Then the good seed will manifest itself through the fruit (Matthew 13:30, 40-43).

Then the divorce will take place.
▪︎ He will gather the tares to burn,
▪︎ but the righteous will shine in their Father’s kingdom.

Have patience, evil will disappear from the earth! 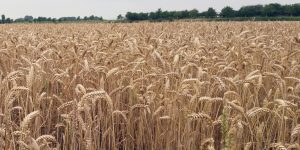