Genesis 3:8-15 NASB
⁸They heard the sound of the Lord God walking in the garden in the cool of the day, and the man and his wife hid themselves from the presence of the Lord God among the trees of the garden.
⁹Then the Lord God called to the man, and said to him, “Where are you?”
¹⁰He said, “I heard the sound of You in the garden, and I was afraid because I was naked; so I hid myself.” ¹¹And He said, “Who told you that you were naked? Have you eaten from the tree of which I commanded you not to eat?”
¹²The man said, “The woman whom You gave to be with me, she gave me from the tree, and I ate.”
¹³Then the Lord God said to the woman, “What is this you have done?” And the woman said, “The serpent deceived me, and I ate.”
¹⁴The Lord God said to the serpent, “Because you have done this, Cursed are you more than all cattle, And more than every beast of the field; On your belly you will go, And dust you will eat All the days of your life; ¹⁵And I will put enmity Between you and the woman, And between your seed and her seed; He shall bruise you on the head, And you shall bruise him on the heel.”

How great was the creation of man!
He made man in God’s image and likeness.

With God the concept of ‘great’ is so very different than with us.
God so often glorifies himself in the small and thereby makes it great! Is it not surprising that the Eternal will walk with us as men?

But when God walks in the garden in the evening, man hides from Him. But God seeks the man who hides himself from Him and says: ‘Where are you?’

Here, on the first pages of the Bible, the Gospel is clearly heard.
But it is not only in this question that the Good News is heard, also in the promise of Genesis 3:15!
Here God promises that one day a Man will be born of a woman and that will crush the head of the terrible tempter, Satan!

With this comforting message man has had to leave the Garden of Eden and has spread all over the world.

But the promise was not forgotten!
Eve hoped that she would bear that son, and after her every woman hoped for it. Thus it is thought among the nations that it was a disgrace to a woman if she bore no son.
This is actually still the case all over the world, except among the Christians.
For the Christians know: ‘A Son is born to us!’ (Isaiah 9:5)

That is why in the church of Christ a man is not worth more than a woman! Yet very different from the world around us; for we are one in the Christ who came to earth for us that night. 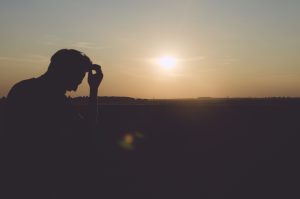