Mark 14:43-52
⁴³Immediately while He was still speaking, Judas, one of the twelve, came up accompanied by a crowd with swords and clubs, who were from the chief priests and the scribes and the elders. ⁴⁴Now he who was betraying Him had given them a signal, saying, “Whomever I kiss, He is the one; seize Him and lead Him away under guard.” ⁴⁵After coming, Judas immediately went to Him, saying, “Rabbi!” and kissed Him.

⁴⁶They laid hands on Him and seized Him. ⁴⁷But one of those who stood by drew his sword, and struck the slave of the high priest and cut off his ear.

⁴⁸And Jesus said to them, “Have you come out with swords and clubs to arrest Me, as you would against a robber? ⁴⁹Every day I was with you in the temple teaching, and you did not seize Me; but this has taken place to fulfill the Scriptures.” ⁵⁰And they all left Him and fled. ⁵¹A young man was following Him, wearing nothing but a linen sheet over his naked body; and they seized him. ⁵²But he pulled free of the linen sheet and escaped naked.

Judas knows where Jesus used to go to withdraw Himself from the crowd.
So he agreed with his principals that they would provide him with the necessary temple police and Sanhedrin servants for the evening. Thus the crowd, led by Judas, moves to Gethsemane (Mark 14:43).

Kissing was generally reserved with the Jews for long-term reunion and goodbyes and as a tribute to a rabbi. So, in itself, it is no wonder that Judas greets his Lord and Master like this. But here it is an agreed-upon sign for the arrest squad to know who they should take, to prevent the gang from grabbing the wrong one in the dark. There was another instruction: the group must prevent a flight from the arrestee and thus place Jesus in custody (Mark 14:44-46).

Jesus’ other disciples still did not understand why their Master endured all this. One of them wants to defend his Master and attacks the mob. (John says this was Simon Peter. See John 18:10, 11 – Does Mark conceal Peter’s name perhaps because of his special relationship with him – see Acts 12:12?) .
He hits the ear of one of the members of the arrest squad with his sword (Mark 14:47).

Mark does not report that Jesus is repairing the damage done (Compare Luke 22:50, 51). But does report that Jesus blames the group. He knew that they did not dare to arrest Him in the temple for fear of an imminent riot. After all, Jesus was loved by many.

So they chose the darkness and the fact that Jesus was alone with his faithful ones. Jesus Himself probably thought throughout this event of texts like Isaiah 53:12, where God’s Servant is numbered among the transgressors, and of Psalm 37:14, where the righteous is taken (Mark 14:48,49).

His disciples leave their Lord alone (Mark 14:50; Compare Mark 14:27).
A young man with only a sheet on (Probably John Mark, writer of this Gospel) – possibly he had awakened when the procession passed his house – is caught and can barely save his body (Mark 14:51,52; ‘Naked’ can also mean something like ‘in his undergarments’).

Without them all, but on their behalf and for us, Jesus continues.

▪︎ Thank Jesus that his capture means your release 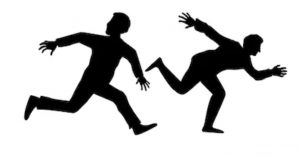