¹) He that – whosoever that
²) Has no exact English equivalent
³) Speak reproachfully, rail at, revile, speak evil
‭‭⁴) Is a characteristic of God
⁵) The Holy Ghost (or Holy Spirit) is the third person of the triune God, the Holy Spirit, coequal, coeternal with the Father and the Son‭
⁶) Or no, not
⁷) Pardon, of sins (letting them go as if they had never been committed), remission of the penalty ‭
⁸) ‘In danger of’, or ‘guilty of’
⁹) Without beginning and end
¹⁰) Judgment, separation (as in the Textus Receptus. Others have ‘eternal sin’)

Hath never forgiveness
Those who know the Christ, and maliciously attack Him, are without hope of salvation.

In danger of eternal damnation
Or better: Guilty of an eternal sin
In saying that Jesus had an unclean spirit they had attributed to the devil the work of the Holy Spirit to the devil.

Those who hope for a second probation hereafter may ponder carefully how a soul that eternally sins in such an environment can ever repent. That is eternal punishment. The text here is ‘amarthmato’ (sin), not ‘krisew’ (judgment), as the Textus Receptus has it. (The King James Version is translated from the Textus Receptus)

This is a profoundly earnest word heard by some people “with fear and trembling” because they fear they are guilty of this sin.

But that is precisely one of the things the Lord wants to teach us here: The blasphemy against the Holy Spirit is done by people who are not bothered by it at all, who call themselves good and pious, who think that they themselves know it much better than God.

Thus they say of the Lord Jesus that He is led by the devil, while He comes from God to save and keep the lost.

These slanderers may fear this word, but the poor and the lost need not to fear. 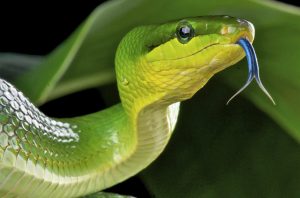